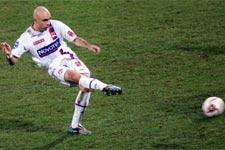 27 players have been used by Gérard Houllier since the beginning of the season in all competitions. Djila Diarra and John Carew make up part of the list… No player has played in every match… 7 have never been replaced…
In 44 official matches, Gérard Houllier has fielded 27 players. Of those 27, Cris, Coupet, Vercoutre, A Diarra, Müller, Squillaci and Cacapa have never been substituted during a match.

Coupet and Squillaci have also had identical match time this season: 2,880 minutes.