To Lorraine for the points and the confidence 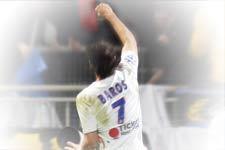 Points are always good to get… for ASNL and for OL. The Lyonnais are 17 points away from their 6th title… but will be missing Cris, Réveillère, Malouda and Toulalan, all suspended… but the side is up to the challenge, in the image of Coupet...
On its trip to Lorraine the quintuple French champion can take another step towards its prize, its number one objective for the season, and take confidence ahead of the Coupe de la Ligue final. OL, a veritable beast away from home, with 11 wins and 3 losses, has acquired 33 of its 62 points on the road. OL, the only L1 team to have won more points on the road than at home, also boasts the best attack and the best defence away from home, having scored more goals and conceded fewer goals away than at home.

In Lorraine, the Lyonnais will find a Nancy side experiencing a run of lacklustre form: 7 points taken since the break, including a single home victory against Toulouse, the worst total in L1. Pablo Correa’s team hasn’t been finishing well, with 26 goals (16th in terms of attack) and doesn’t have any consistent scorers despite the arrival for Fortuné. In fact Benjamin Gavanon does almost all the work in this respect, involved in 14 of their 26 goals. The native of Marseille has scored 5 goals and has 9 assists, including 7 from dead ball situations. “The Juninho of Lorraine” is aware of the size of the task in hosting OL: “It would be a real feat to beat OL. They have an enormous collective force and a real thirst for victory…”

ASNL will be without Duchemin, Chrétien and Puygrenier; not to mention Zerka, Sarkissian and Bracigliano. The absence of Puygrenier will deprive the team of a certain aerial prowess in both defence and attack (3 of Nancy’s 7 goals). The team will be inspired to get a good result before the break that lasts until April 7 (for international matches and the postponed match against Bordeaux). If they don’t, doubt will surely creep in… It’s long time since the club dear to Michel Platini has been among the top spots in L1 (2nd in round 12).

OL has dropped 9 points at home since the beginning of January (1 win, 3 draws and 1 loss), but has rediscovered its away form in its last 2 trips: victory at Lille; a masterful victory over St-Etienne. After their Roman disappointment, Juninho and co know their schedule for the rest of the season with precision: secure their 6th title as quickly as possible and lift the Coupe de la Ligue. The first double in the club’s history; the first league and cup double in the history of French league football.

Defending their crown? It would take a true catastrophe for OL to lose it now. OL, in below-par form, hasn’t inspired hunger in its potential rivals, the closest of which trails by 13 points 10 matches from the end of the season! This trip to Meurthe and Moselle will be made without Cris, Malouda, Toulalan and Réveillère, all suspended. Gérard Houllier will thus have the opportunity to tinker with his squad knowing that his hand has been forced. In the position of centre forward, Fred or Baros will probably miss out as Benzema is more likely to be played out wide. In midfield, there will be 5 players vying for 3 places. Will that give Fabio Santos a chance to take the field again? In defence, with Cris suspended, Müller is the favourite to replace him. Hatem Ben Arfa rejoins the squad.

“After the elimination in the Champions League and the draw with Marseille and before the Coupe de la Ligue final, we need to steady the ship. This match in Nancy will be a chance to see a different team, due to the 4 suspensions…” Grégory Coupet summed up what’s at stake in this match without forgetting to mention that the title hasn’t been won yet. Words to get the squad moving.
Facebook
Tweet
Forum