9 Lyonnais called up by Raymond Domenech 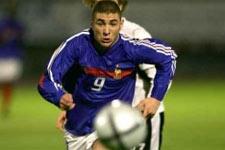 9 Lyonnais have been called up by Raymond Domenech to play in the matches against Lithuania and Austria on March 24 and 28 in Kaunas and Saint-Denis. Karim Benzema, in his second call-up to the national squad, is a chance to get his first start for Les Bleus.
The young OL striker was included in the squad for a friendly match against Greece on November 15 2006 but couldn’t play due to injury.
The 9 Lyonnais called up: Grégory Coupet, Eric Abidal, Sébastien Squillaci, François Clerc, Jérémy Toulalan, Karim Benzema, Sidney Govou, Florent Malouda and Sylvain Wiltord.

It’s the first time that the preliminary squad for an official France match has had so many OL players on it.

This is the first call-up to the national team for four of these players: Nasri, Diarra, Diaby and Piquionne.
Facebook
Tweet
Forum