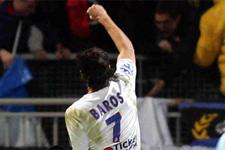 So the big clash between Lyon and Marseille will have no winner. OL came within a whisker of winning the battle of the “Olympiques” but conceded at the death. OL still has a 13-point lead over second-placed Lens.
Unable to kill the game off during a long period of dominating the game, Gérard Houllier’s men cracked in “money time”, a fate they used to impose on other teams on a regular basis. Niang and co came to OL’s den and reminded the champions that their French rivals would give them as little as their continental rivals.

While they didn’t lose, unlike last season (2-1loss to OM in the Coupe de France), the Lyonnais didn’t win either, failing to quell the tide of unease following their Champions League elimination at the ands of AS Roma. Only five days after their last-16 European loss, conceding a goal and a share of the points in the dying moments left a strange taste in the mouth. Inadequately rewarded for their efforts, the Lyonnais can definitely see the glass as being half empty considering they led with seven minutes to go.
But a bird in the hand is worth two in the bush, and OL will, in the end, see the glass as half full considering that they were very close to conceding a second and losing the match in the final minutes.

Their first half was well different from the one in their clash with Roma on Tuesday night. While Albert Emon’s men created as many chances and Mexes and co did, OM is no AS Roma. And Cissé (28’) and Maoulida (33’), with headers, couldn’t emulate Totti and Mancini. Even more embarrassing it’s the fact that they conceded early in the match. Civelli cleared a Karim Benzema cross in the centre of defence but it fell to the feet of Milan Baros who lashed home from the edge of the area (19’). After two high-intensity matches against Saint-Etienne and Roma, Gérard Houllier had decided to freshen up his tired side. The Czech successfully replaced Fred up front and scored his 3rd goal of the season in as many starts.

At the break, the Marseillais could count themselves lucky to be only one goal behind, such was the enterprise and determination going forward that OL demonstrated. Carrasso denied Juninho (1’ and 16’)then Tiago (11’) and saw the Brazilian’s effort from distance fizz wide off the post (35’). Milan Baros (4’), François Clerc (10’) and Karim Benzema (31’) were all off target.

One could have imagined the Lyonnais would be liberated and encouraged by a strong showing in the first half. But they weren’t. The beginning of the second half was to their advantage. Juninho’s free kick went narrowly wide to the right of the OM goal (52’) and Abidal’s shot found the gloves of the OM keeper (55’). On two occasions Wiltord came close to doubling the lead. His shot from the left smashed against the post (60’) and then his header missed the target (62’).

But OL’s confidence is probably still too shaky and the injuries from the beginning of 2007 too recent to permit Juninho and co to hang onto such a meagre advantage. 20 minutes from the end of the match, Gérard Houllier’s men backed off to the point of leaving their keeper stranded in the face of repeated OM attacks. On a Samir Nasri corner, the international keeper took two grabs to hold Niang’s header (72’) before fisting away Cana’s powerful shot (85’). The Lyonnais had left the initiative to their visitors for a long time. Only Juninho, from a free kick, had called Carrasso in to action, drawing a superb save from his well-placed shot (77’).

By backing off and submitting to the pressure, OL ended up conceding. On the very cusp of off side, Mahamadou Niang rounded Coupet before shooting into the empty net, miring OL in doubt all over again. The bill could have been even costlier had Abidal not cleared off the line after Niang once again rounded Coupet.

A few months ago, the Lyonnais wouldn’t have been satisfied with a draw like the current OL is still on the comeback trail.
Even though OL didn’t make the most of RC Lens’ draw with Sedan, it still has a 13-point lead over its second-placed rival. That’s not the least of the good news though.

While their standing on the points table, the fruit of a scintillating first half of the season, is still largely in their favour, jus 3 weeks out from the final of the Coupe de la Ligue, the Lyonnais still have to capitalise on the good intentions they demonstrated in the first half and put their nose to the grindstone ahead of the clash with Nancy next week. It’s all about not wasting the end of a season that could well turn out to be an historic one.
Facebook
Tweet
Forum