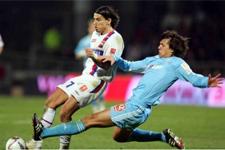 With desire and determination, that’s how Les Gones approached the match from the first whistle by referee Philippe Kalt. But they weren’t the only ones.
Albert Emon and his men planned on “taking advantage of OL’s battered morale” following the elimination of the French champions from the Champions League. During the 90 minutes, OM sought to overturn the L1 hierarchy, in which they had occupied 8th place for two (long) championship rounds. With one extra point, the same ranking and still aiming for a Champions League place upon leaving Gerland, OM stayed on course for its palpable objective.

Baros was immediately taken down by Zubar and Cana, the ball having been in play only 20 seconds. Flat on the ground, the OL number 7 was obviously the target of the two OM hard men. Milan was taken down another two times in the first half. His breaks and ball retention effectively forced the opposition to foul him. As sis his pressure on the keeper. And on a cross from Benzema, the Czech international made the most of a hasty Civelli clearance in the centre of defence to blast home his third goal of the season, all of which have been at home and matches he has been a starter for. With his first-time shot from the edge of the area, the OL striker opened the scoring after 20 minutes with his first shot on goal.

The first victim of the OM central defence, he left the field for a few moments, accompanied by “Doc” Amprino, after his nose had made contact with Zubar’s arm. And the blows rained down on Baros in his high-risk position. Every time he touched the ball it made one think how difficult the job of the centre forward is. Baros gave his all to win the ball, losing some feathers in the process. A few drops of blood later, he resumed service.
There were 40 minutes left; 40 minutes of tousles, of movement, of runs; of keeping and protecting the ball; of losing one’s man, staying on the right side of the defensive line and controlling the ball with one’s back to goal… with a defender tight behind. Pressured by Zubar, clattered into by Civelli, Baros finished the match on his knees. Exhausted, he somehow found the energy to harass the OM defence right to the end of extra time. Spurred on by the fans and a prodigious thirst for victory, Baros didn’t stop his assaults on the sky-blue defence. He deserved better on his curled shot on Taiwo and his left-footer repulsed by Carrasso (92’). He also came very close to scoring after rounding the OM defence with a mesmerising run in to the area. His shot was well turned away by an inspired Carrasso (93’).

After 28 possessions, most of which came in the opposition half, Milan Baros could finally have a breather, having put in an enormous effort notable for its sense of the game, the potential it brought his team and above all… his voracious appetite for work well done.
Facebook
Tweet
Forum