The ideal battle to get OL back on track 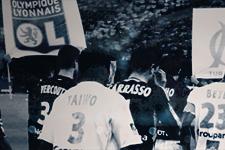 Five days after their last-16 elimination from the Champions League, the Lyonnais probably haven’t dressed all their wounds yet. They will certainly need some time, and some titles, to eclipse the disappointment of their brush with Roma. And it’ll start with a win against OM.
They will need to rake in some wins, the only viable remedy for their post-elimination hangover. “We have to start a new page,” confided Anthony Réveillère. “We just want to get back on the pitch and win again for our fans and ourselves.” Doubtless desire and motivation will be strong on the part of OL, so the only question is whether OM is the right team to play in order to get back on track.

Looking at OM’s recent performances, the answer is undoubtedly “yes”. The negative spiral Albert Emon’s men are in – taking 2 points, both at home, from their last 6 matches – has brought the fans, players, directors and staff to join forces and declare a “Sacred Union”. But that hasn’t stopped the storm clouds forming over the Phocaean club. Ideally placed in second spot after round 21, OM’s start to 2007 revealed gaping holes that the absence of Franck Ribéry couldn’t sufficiently explain. Currently 8th in L1, Lorik Cana and co can’t afford to leave Gerland empty-handed, as they would risk definitively saying goodbye to Champions League qualification should they slip any further.
Forced to pull themselves together in the face of injuries to Julien Rodriguez and Wilson Oruma, handicapped by Djibril Cissé’s current difficulties and, more generally, by an attacking force reduced almost to nothing – 1 goal in their last 6 league matches – and mired in 11th place in terms of away games, it’s almost as complete outsiders that OM will come to Gerland on Sunday. Almost… Because, for the last 2 seasons, against Les Gones, Niang and co have been able to turn things around, eliminating OL in the last 2 editions of the Coupe de France. In 2005-06, they won out at Gerland, the home of the French Champions, only days after their hosts were cruelly eliminated from the Champions League by AC Milan. And does it matter that OL “set the record straight” in their first league meeting this season (4-1)? “In relation to our first league meeting of the season, this match is totally different,” stated Gérard Houllier. “Notably, the dynamic is completely different. We’re now in the final sprint of the season, the home stretch.”

Having said their goodbyes to the Champions League, the Lyonnais now face a decisive beginning to the spring. “We’re now focused on our major objectives, which are first of all the league and then the Coupe de la Ligue » announced the OL manager. While the Marseillais need points to claw their way back up the table, the same can’t be said for OL, for whom a win would be more important mentally than in terms of the standings. “We’re intent on setting things straight in our game, things like set pieces, self-discipline, control of the game and a rigorous approach,” confided Houllier. “This match could be the key to bouncing back.”

Keeping in mind his desire to bring some freshness to the traditional starting 11 dulled somewhat by 2 important battles in 4 days, the OL technician doesn’t hide the fact that it’s “a pivotal game because in terms of the attitude against Roma, we weren’t up to scratch. It wasn’t the team that made us proud”. One week away from a far from easy trip to Nancy, and 3 weeks from the final of the Coupe de la Ligue, victory against OM would do OL’s confidence, which took a battering from the defeat to Roma, the world of good. Before travelling to Saint-Denis for one of the most important matches of the season, OL will be strongly inspired to rack up some victories. So OM’s visit to Lyon comes just at the right moment for OL to reassure and rediscover itself. It’s also a chance to take the honours in a season where the head-to-head record is one apiece, OL winning in the league and OM qualifying in the Coupe de France, both times at the Vélodrome.
Facebook
Tweet
Forum