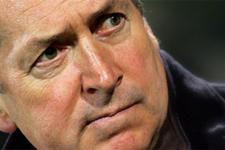 After OL’s elimination from the Champions League and a few days away from hosting OM, Gérard Houllier looks back on the meeting with AS Roma.
Gérard Houllier, was it a difficult night?
“It’s not that night that counts now, it’s the match against Marseille. We have closed the book on the Champions League for this season. We didn’t have a good day, we made mistakes and we didn’t play to the best of our ability. Also, the opponent was fantastic. We were beaten by a better team. We made too little of or didn’t notice what a fantastic job we did in the game in Rome. We would have had to play exactly the same match again and wait for the last 20 minutes to make the difference. Unfortunately, we made things tough for ourselves by conceding 2 goals in the first half.”

What was going through the players’ minds after conceding the first goal?
“They couldn’t control their nerves, which would have allowed us to control the match. In that respect, we were remiss. The second goal we conceded came from the best intentions on our part. We really wanted to equalise before the match. We were dangerous, we pushed forward, and then we conceded on the counter. The intention was laudable but we made an immature tactical error. The team unbalanced itself. It’s a real shame.
I was really despondent last year against AC Milan, because I thought the loss was an unfair one. Today on the other hand, we can’t cry foul over Roma’s victory and qualification, because they were the better team.”

What are your expectations for the remainder of the season?
“Our season is still looking better than last year. I took a real knock on the head with our elimination from the Coupe de France against Marseille. That defeat was really tough. In the cup, you know there are always many reasons why you might get knocked out. That’s part of the game. The goal of a club like ours is to be champion. We have more points than we did at the same stage last year and the final of the Coupe de la Ligue awaits us. The season could have been more fantastic had we qualified for the quarter-finals of the Champions League. Had we beaten Roma, it would have held us in very good stead psychologically for what would follow. Right now, we need to get our heads right, focus on the commitment, conviction and enthusiasm that have come and gone somewhat recently. Theses qualities were there against ASSE, and we saw the result…”

On a personal level, there is talk of your going to Australia, to the French national soccer academy, to Bayern Munich…
“I hope they will begin to discuss something else, as I find it restrictive. I imagine there would be even more clubs… All I can tell you is that I’m still in the driver’s seat here. I’m working with my team and I don’t envisage leaving the club in the slightest. Unless I’m asked to leave…”
Facebook
Tweet
Forum