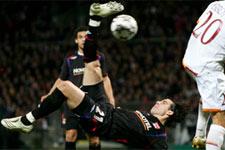 After 18 home games undefeated in Europe, OL finally went down at Gerland; a loss that meant their elimination…
In December 2002, the Turk Ozkan from Denizlispor won his team qualification in the last 32 of the UEFA Cup at Gerland. A few weeks earlier, Ajax had won 2-0 at Gerland. 2 big disappointments and the last 2 OL defeats on French soil. Coupet, Juninho, Müller, Cacapa and Govou had played against Bataves; Vercoutre, on the bench. Against the Turks, Coupet, Juninho and Cacapa took the field; Vercoutre and Müller, on the bench. And on Tuesday night against the Italians, Coupet, Juninho and Govou were starters; Müller, a substitute.

This elimination at the hands of an unheralded Turkish side really spoiled the party for OL’s 100th European match. Against Roma on Tuesday night, the final result left the OL supporters and their club with a serious hangover. There will be no 4th-straight appearance in the Champions League quarter-finals. 2 fatal encounters with Roma, where Juninho and co didn’t score a single goal despite taking 35 shots! In European knockout ties, on 3 occasions OL has been unable to score in the tie: Denizlispor (2002-2003), Maribor (1999-2000) and Nottingham Forest (1995-96).

Out of the Coupe de France and the Champions League, there are still 11 league matches, 6 of which will be played at home, and the Coupe de la Ligue final to nicely cap off season 2006-07. The problem of a heavy schedule will no longer affect OL, with the calendar showing 12 matches over the next 11 weeks. So, a break from the hectic pace for the squad now at full strength: 23 players not counting youngsters Rémy and Bettiol. For the numerous OL internationals, there are still games to play for their countries (2 in March). OL will have played 54 matches this season… as they did in 2005-06.

[IMG41866#R]From here on out, there is the 6th consecutive French title to win, which could be turned into a double with a victory in the final of the Coupe de la Ligue; it would be the first in the club’s history. A title, even a double, which should be judged on its merits, even though some claim that OL’s path to the Coupe de la Ligue final was largely cleared of obstacles by a favourable draw. In the league, with 11 games to go and a 13-point lead, it would take a catastrophe for OL to beaten to the finish line. As for the Coupe de la Ligue final against BordeauxGérard Houllier will have to make his choices as to the squad and the starting 11. Will those who have earned the right (in terms of game time) to play in the final be given priority, or has the elimination at the hands of Roma changed the playing field?

Knocked out of Europe earlier than expected, OL will see spring this year very differently, hoping to bring home the 2 titles home to the trophy cabinet. They will also be hoping to see or find again, until the end of May, the vigour… the self-discipline… the fair play… the technical and tactical qualities… collective qualities of mentality and morale (tenacity, solidarity, respect…)… finishing… all qualities OL has made its own in its 5-year reign as French champion.
Facebook
Tweet
Forum