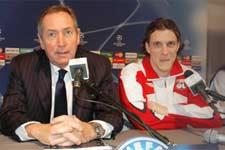 The OL press conference didn’t reveal anything in particular. For Gérard Houllier this match against AS Roma has the feel of a final…
Gérard Houllier

Gérard, since the first leg, can one say that OL has been better than Roma?
“I prefer to stick to the lessons learnt from the first leg. I didn’t find that Roma had got any worse. They have simply rotated the squad. We, on the other hand, are definitely gaining in strength.”

Will the second leg be the same kind of match as the first?
“I have no preconceived ideas about how the match will be. But I do know what we are going to do. Penalty shootout? That is one of the possible eventualities of a knockout Champions League match.”

Do you expect a hard-fought match with intimidation on the part of the Romans?
“No, because we’re playing at Gerland. I also have confidence in the refereeing. At this level, there are only very good referees.”

Does Tuesday night’s match resemble last year’s clash with PSV?
“What I know is that of all OL’s last-16 opponents, AS Roma is the most prestigious. Our side is better than in past years and has more experience.”

Was the derby a good preparation?
“It was the perfect dress rehearsal.”

What will make the difference for qualification?
“A solid team performance and at some stage a stroke of individual or team genius. Not to forget a bit of luck.”

What do you think of Totti?
“Football is all about opinions. I think Totti is a world-class player. You can’t judge him on his World Cup as he came into it with a serious injury. He didn’t have the time to prepare properly. He should be judged on his entire career. My defenders will confirm he is a real handful.”

Is the bottom line not to concede?
“It’s like a final. What counts is to score one more than the opposition.”

Will Toulalan’s absence be detrimental?
“No, because OL is first and foremost a collective. Also, Alou Diarra is back from injury. He had different qualities. He will be very, very useful for the team on Tuesday night.”

Do you have a particular formula for playing this type of match ?
“No. With Monaco, we had a hard campaign with some comebacks. It remains a last-16 clash with a 0-0 draw in the first leg. Only qualification counts.”

Do you have any particular responsibilities as a defender?
“As for every match. If we concede one or more goals, we’ll just have to score one more and I’ll do my best to score if that scenario come about.”

Totti?
“He’s a great player. In the fist leg, he was dangerous with his movement and set pieces.”

Will self-discipline be important?
“It will be important. We’re used to playing this type of match. We don’t respond to provocation when it arises. Also, that’s what the referee is for.”
Facebook
Tweet
Forum