Forza OL... towards the quarter finals 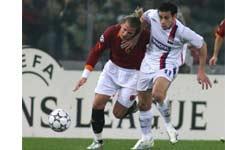 The Lyonnais absolutely must win this match to make it to the quarter finals of the Champions League. The first leg was a rather closed and tough affair. Will the return leg be any different? It doesn’t really matter… the only goal is qualification… Lyon’s.
The match report form the first leg is still in everyone’s mind. It reflects that the match was a closed-down, tight affair in which it was important for both teams not to lose and not to concede. Almost 60 fouls in total, 11 yellow cards and almost no scoring chances. At the final whistle, both sides will see more positives than negatives in the nil-all scoreline.

So there is everything to play for at Gerland, and the scenario is hard to predict. But we won’t put a single euro on the Italians. The Giallorossi will definitely employ a wait-and-see tactic and would be happy to play for a scored draw to eliminate the almost 6-time French champions. And if they need to employ their Comedia dell’arte skills to do so, they won’t hesitate. They will be counting on their solidity, their solidarity and their aggression… as well as on Totti to score; on the experience of Panucci, Perrotta, Chivu and De Rossi; on the solidity of Mexes; on the organisational sense of the diminutive Chilean Pizarro; on the imagination of the Brazilian Mancini… they also have the means to make the difference from direct free kicks by Totti or those taken by Pizarro looking to find an attacking head in the area.. Since OL’s trip to the Olimpico, Spalletti’s men have quietly gone about the business in the Serie A (a win and 2 draws) to protect their second placing behind an untouchable Inter. The Roma manager rested most of his stars on Saturday against Ascoli, fielding only 4 first-team regulars.

OL has almost no choice. Any result other than a win would send Juninho and co crashing out of the competition, except for a 0-0 draw and a favourable penalty shootout. Since the match in the Eternal City, OL has been on the up and up, improving to the point of regaining its stunning form from the first half of the season. 3 against Sochaux, 3 goals in the derby… they have played well, been consistent, controlled their game and finished well… the best OL has returned at just the right time… as if it had been foreseen by the OL family.

On Tuesday night, for the first time in a last-16 Champions League return leg, OL will take the field without a lead from the first leg. Juninho, Coupet and Govou will remember their feat from season 2001-02 in the last 16 in Bruges. Beaten 4-1 in Belgium, Jacques Santini’s men, at the death, eliminated the Belgians by winning 3-0. The only European qualification won in a return leg at Gerland since Jean-Michel Aulas took the reins at the club.

“We will have to be patient and take our time. If we concede, the situation gets very complicated. This Roma team is very solid…” Did Alou Diarra, the day after the win at Saint-Etienne, outline OL’s tactic? Gérard Houllier’s men are athletes of a very high level. Self-discipline will obviously be very important, considering the Italians’ skill in the art of provoking even the most unflappable of players. Juninho's artistry from free kicks will also be of great importance. Let’s not forget that this OL squad has enough depth to allow the manager to make telling substitutions in the course of the match. OL’s 138th European match will be played without Toulalan, suspended, while Juninho, on 2 yellow cards, will be careful not to betray the least sign of frustration, as will Réveillère… for the rest of the adventure. Indeed, OL has the chance on Tuesday night to write a grand new chapter in its European history. “I know what we’ll do…” These words Gérard Houllier in his press conference inspire optimism. So Forza OL… Arrivederci Roma.
Facebook
Tweet
Forum