Huge party… and then Rome 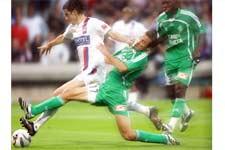 Whatever the circumstances, a derby is still a derby… 3 days before the visit of AS Roma, OL travels to the Cauldron. While OL is looking for a 6th title in a row, ASSE is in hot pursuit of a European place…
These 3 points at stake will always be different from the rest. Some seasons, however, mathematic importance accompanies the torrid battle for regional supremacy. The 2 “enemy” clubs are separated by 19 points. Les Verts won’t catch the Lions, but both teams are headed for Europe. And if the Champions League and the title are foregone conclusions for the quintuple French champions, a top-three finish isn’t unrealistic for ASSE. Also spicing up the encounter is the fact that the club from Forez hasn’t won a derby in the 14 editions since April 1994.

Les Verts, who have lost their last 3 home games, got back on track with an historic win over PSG at the Parc des Princes. A real shot in the arm ahead of the derby. Challenge? The word comes easily to Julien Sablé and to Laurent Roussey. “To win a game like this, you have to start by winning the challenges. Respecting your opponent doesn’t stop you from giving it everything you have physically and athletically; all your drive and determination. It’s a real battle.” The assistant coach said these words on the club’s official site. The words of Julien Sablé are hardly any different: “The victory in Paris really calmed us down and pulled us back up the table. The team that wins the most challenges will win the match. Not to forget the importance of our fans in this kind of match.”

ASSE has more up its sleeve than physical engagement and the fervour of its fans. The scoring form of its strikers (Ilan, Feindouno, Gomis) constitutes the second-best attack in France after OL. There is also the multivalent talent of Czech midfielder Heinz as well as the prowess of Janot, the teamwork of the central defensive pairing of Camara-Hognon, the leadership of Sablé… This squad is slowly carving out a future for itself… despite the departure of Piquionne.

OL has 3 irons in the fire in March. To plow ahead towards a 6th title, to win its 2nd Coupe de la Ligue and to qualify for a 4th straight time for the quarter-finals of the Champions League. To everything a season, even if there is no time to lose for OL to hit full stride. Over the last few matches, OL’s play has been more consistent and the results have come: 2 wins and 2 draws. This is reassuring, as are the returns to the squad of various long-term injuries. Competition and sharpness have returned to OL’s repertoire. And as a schedule cannot be controlled, in the end this derby comes at a good time. “It’s the most important match. The next match is always the most important. We have Roma coming up next… there’s no question of throwing the match.” Gérard Houllier, very relaxed in his press conference, doesn’t change his tune on the pretext of the clash with the Italians on Tuesday night.

Squillaci, Abidal and Toulalan rested against Sochaux, will meet up again on the field at the Geoffroy-Guichard. One player who took on Sochaux will either be on the bench or in training on Saturday morning. And there will be no calculations going on and no holding back in the challenges. All this makes for a great derby against an illustrious neighbour that is convinced the time has come to put an end to its run of 14 matches without a win.
Videos