Discovering the derby at Geoffroy-Guichard... 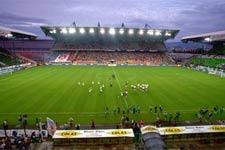 Several players on both teams have not yet experiences the joy of playing in a derby at the Stade Geoffroy-Guichard… On Saturday, several of them will add their names to the list of happy participants…
In the Saint-Etienne squad, Hautcoeur, Landrin, Ilan, Guarin, Heinz, Sall, Perquis, Moussilou, Dernis (injured). As for Lamine Diatta, he has never done it in a green shirt. He replaced Juninho in stoppage time at the end of the October 3 2004 edition of the derby. It’s also the first derby for Les Verts’ manager Ivan Hasek.