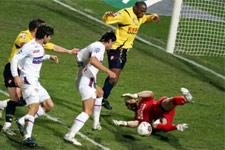 “Our European match,” that’s how Alain Perrin sized up the match a few hours before kick-off, with OL having just played in the most prestigious competition. How right he was…
The supporters were on an emotional roller coaster throughout a game of high emotions in which OL managed a theatrical spectacular in their own inimitable style, worth of a Champions League clash.
The Gones’ performance was very promising for the last-16 Champions League clash coming up in 12 days and terrific for the team’s morale.
It was excellent to see the return of Karim Benzema, victim of a knock to the thigh on November 10 last year against V.A., an injury that recurred on January 11 in training. So good to see Nino again, still decisive, talented and with hot rocks in his boots…
In a stadium full to bursting, Juninho and Brechet, two good old friends, greeted each other before kick-off in front of Mr Layec. Dagano, on the other hand, wasn’t so friendly and in fact opened the hostilities with a skidding shot easily taken by Coupet.

A few minutes later, a Juninho free kick was parried by Teddy Richert straight onto the head of Cris, but the keeper hit the deck and easily stopped the shot. The end-to-end nature of the game clearly demonstrated the desire of the 22 players. OL was the first to crack. Alvaro Santos, skilfully and narrowly beat the off-side trap and scored his 7th goal of the season with the outside of his left foot (9’).
The Sochaliens reminded OL that coming back to the league after a Champions League fixture can be a tricky thing indeed. So OL needed to play with dignity and honour to stop doubt from setting in. So Juninho kept the team pushing high up the pitch to force Sochaux to play at a high tempo… this tactic allowed François Clerc to pick up after Benzema’s excellent effort on the edge of the box was frustrated, but the young international’s shot fizzed wide (17’).

Leading against the French Champions at Gerland, Sochaux could easily have been expected to fall back and defend their lead as many teams that take the lead on Lyon do. But they didn’t. On the contrary Alvaro Santos and Dagano Bore down quickly on Coupet, playing each ball to the limit as if they were behind on the scoreboard. The first effort was block by a Fabio Santos at full stretch in the penalty area (22’), and Coupet shut down the second… and then Cris tackled the lively Alvaro Santos in mid-shot. Mr Layec pointed to the penalty spot straight away. Ziani stepped up and blasted his penalty home amid the din from 40,363 outraged OL supporters.
At the other end, Kim Källström’s header went over, his scissor-kick went wide (35’) and his angled shot was cleared by Richert (37’). Following his example, OL began to rain shots on Richert’s goal. More and more accurate; more and more dangerous, the incessant OL attacks finally paid off. A huge effort from François Clerc and Anthony Réveillère allowed Milan Baros to open OL’s account (40’, 1-2). The first half ended with Berthod’s cross-shot that flew over, a lob from Fabio Santos and Källström’s cross that both ended up in the hands of Richert (42’, 43’, 45’).

Sylvain Wiltord made his comeback at the beginning of the second half. Sochaux was still very keen to go forward. Juninho returned to the pitch with an unbeatable ambition. He had a shot after being set up by Benzema; he took a free kick from 30m and had a header from a Réveillère cross. Each time, he found an inspired Teddy Richert there to frustrate him (49’, 53’ 65’).
On the other side of the pitch, Abidal replaced Müller and saved, with his first touch, Coupet’s goal from N’Daw (72’) before Grax scored Sochaux’s third.
On a counter attack, Sochaux showed that they had brought their scoring boots to Lyon. In the rush after the goal, Wiltord replicated the feat with a superb skidding shot (90’, 2-3). In the action following that goal, he provoked a foul in the Sochaux area.

Unbelievable! After 2 free kicks, a header and a right-footer saved by the Sochaux keeper, the OL marksman found himself in front of Richert for yet another duel. The remaining minutes turned into seconds. While Juninho’s last penalty, shot to the right of the keeper, was saved by Janot, this time he wrong-footed Richert and blasted the ball in to the back of the net.

At the end of time added on, OL, pushed by a desire to win and to get a result, by an enormous mental strength and more than 40,000 supporters, overturned a very dangerous-looking situation. A welcome surprise!
Facebook
Tweet
Forum