Still to be won 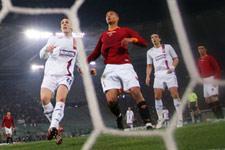 The Lyonnais secured a nil-all draw in Rome that keeps their hopes alive. The return leg is on March 6 at Gerland. The only black spot on the evening: Jérémy Toulalan won’t play in the return leg because he received his third yellow card of the competition.
They secured a scoreless draw in Rome that allows them to think big ahead of the return leg at Gerland. In European club history, 68% of teams qualified after drawing the first leg 0-0 away: a stat to incite optimism at OL. The control displayed by Tiago and co corroborates this promising statistic. After two league wins on the trot, the Lyonnais often controlled the Romans, conceding little space, especially on set pieces.

There was a time, not so long ago, that the second-placed team in the Serie A would have eaten up the leader of L1. The gap between the tow leagues has probably closed in the last few years. Olympique Lyonnais has likewise drawn nearer all the best teams in Europe, as the draw at Italy’s second-places team proves. There was a time when this result would have been sufficient, even pleasing, to the OL camp. But after 90 minutes of play, the impression that something better was to come persisted. What’s important I that the Lyonnais have to make the difference at Gerland on March 6, a performance well within their reach in terms of their self-assurance and the small number of goals they have conceded there. The Romans haven’t shown much that would really trouble the calm Olympiens at home.

At the end of a first half largely to their advantage, Gérard Houllier’s men probably wouldn’t have recognised the pale team that went down to Empoli last week. OL started the match ideally, creating the best chances of the first half. Juninho’s free kick was deflected by the head of Taddeï and went on to hit Doni’s left-hand post (7’). François Clerc and Sidney Govou went wide (16’, 18’). The Brazilian keeper smothered the ball at the feet of Malouda (21’) then saved his shot (42’).
It was much the same for the Romans. Totti fired over (11’) and Taddeï and Mancini went wide (24’, 40’), which kept Luciano Spalletti’s men in the statistics. In the game, though, it was a different story.
Throughout a stop-start game often rendered unplayable by the blowing of the whistle, the most active player in the game was, incontestably, Mr Riley. For dangerous tackles or blatant simulation, eight Romans experienced Riley’s trigger-happy approach to refereeing, with OL finding the pointy end of the whistle also but to a lesser degree.
After the break, Jérémy Toulalan received his third yellow card of the competition, meaning he will miss the return leg, for (very light) contact with a Francesco Totti more inclined to dive in order to win free kicks than to applying himself to running the Roman game. Hardly seen in any constructive action, the Roman captain was no lees dangerous than usual with set pieces. His powerful free kicks forced Grégory Coupet into immediate action, having to punch away and save from the Italy international (62’, 72’).

The Lyonnais pulled back but stayed dangerous through their mastery of set pieces. Doni parried the Juninho’s free kick only as far as Fred, but managed to save the Brazil striker’s shot (65’). On a corner, Sidney Govou’s acrobatic volley didn’t trouble the Roman keeper (66’). Juni’s final free kick found only the gloves of Doni (90’).

OL is at the halfway stage towards a fourth consecutive Champions League quarter-finals appearance, but the toughest is yet to come. Without Jérémy Toulalan but with a squad that’s getting stronger all the time and seems to have begun to rediscover its form from the first half of the year, OL should win the tie. Qualification comes down to one match. It’s simple, yet so far away…
Facebook
Tweet
Forum