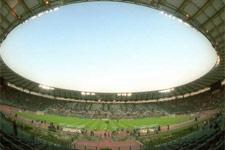 6 stadia in the world have hosted the Olympic Games and the World Cup final. The Stadio Olimpico in Rome, capacity 81,190, is one of them…
In 1960, the Olympic Games were held in the Eternal City. The black American gazelle Wilma Rudolph won the 100, 200 and 4x100m; Michel Jazy battled for a superb silver medal in the 1500m behind the Australian Herb Elliot; in the streets of Rome, Ethiopian Abebe Bikila, the barefoot marathon runner, crossed the winning line under Constantine’s Arch in 2 h 15’ 16”. Frenchman Mimoun, title holder from Melbourne 4 years earlier, failed terribly and finished in 34th place.

Before the World Cup in 1990, the stadium hosted the final of the European Cup of Nations in 1968. Italy beat Yugoslavia 2-1. Zoff, Mazzola, Facchetti, Riva, Anastasi… on one side; Pantelic, Dzajic, Musemic… on the other. In 1980, in the same competition, the final saw RFA play Belgium, with the Germans winning 2-1.

There was also the World Athletics Championships in 1987. Canadian Ben Johnson won the gold and beat the world record for the 100m (9.83). Frenchman Gilles Quénehervé became world champion in the 200m.

In 1990, the World Cup of football. On July 9, the final was played between Franz Beckenbauer’s Germany and Argentina, with the South Americans going down 1-0. In front of 73,603 spectators, Germany’s Matthaus got the better of Argentine legend Diego Maradona.

There have also been European club finals played there. On May 30 1984, Liverpool beat AS Roma on penalties in front of 69,693 fans (European Cup). Also, in 1996, the final between Juventus and Ajax when Didier Deschamps’ Juve beat the Dutchmen on penalties (67,000 spectators). The final in 1977 saw Liverpool beat Mönchengladbach 3-1. Not to mention the C3 finals between AS Roma and Birmingham in 1961 and between Inter Milan and AS Roma in 1991.

OL, who first played there against Lazio Rome, Is set to play in a superb sporting theatre. In the world, the Azteca in Mexico, the Olympic stadia in Munich and Berlin, Wembley in London and the Stade de Colombes in Paris kepp it company. These 5 stadia have hosted Olympics and World Cups. Such a place cannot leave a true sports fan cold.