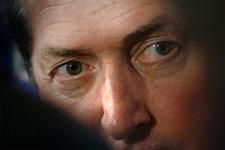 Is there a special feeling coming back to Italy after being eliminated last time around by Milan?
“The match against Milan was cruel and unjust end. But experiences like that make the players stronger for matches like this clash with Roma.”

Is OL ready?
“The team has, in mental terms, come through a bad patch very well. And as far as our play is concerned, it’s getting better and better. The squad has stuck together, they are united. The road to success isn’t always a straight line.”

How will you react if OL is eliminated?
“It would be a failure. But at the same time, I’m realistic. There are 16 teams in the running and it all comes down to details. We are aware of the quality of AS Roma.”

Is the away game always the more important?
“Yes. It counts the most as it can put you in a very good position. It gives you a chance to ride your luck… or it can ruin your hopes.”

How is Tiago doing?
“He just visited the Vatican, hoping for a miracle…”

Is the AS Roma of today as good a team as the one you knocked out with Liverpool?
“Yes. When we eliminated Roma, they had just won the title. Now, Roma is behind Inter, who are in unbelievable form. As Roma and OL are evenly placed to win. OL’s advantage? Playing the return match at Gerland. We saw the importance of that last year versus AC Milan.”

What do you think of Italian football?
“It’s tough to play; never easy to move, even when you’re on top. I have fond memories from my last game (2 goals scored), but that’s just a memory. Anyway, it’s different. This time I’m playing for OL.”

How are OL’s spirits?
“2 or 3 weeks ago, it would have been very different. We’re back on track now, with 2 wins in a row, even though our performances haven’t been perfect. We won and that’s important psychologically. After the Champions League, it’s different in the league. We played well in physical terms against Lille.”

Over time, does the pressure attached to your ambitions wear away your desire to succeed?
“No risk of that. We’ve been improving for several years and we want to win this competition.”
Facebook
Tweet
Forum