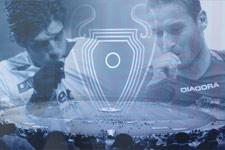 In an historically charged location, the Lyonnais will take part in the last 16 of the Champions League for the 4th year in a row. An away game to manage well before the return leg at Gerland. Watch out of As Roma’s Totti: a cool customer with an impressive bag of tricks…
Will OL continue its remarkable form in the last 16 of the Champions League? In 3 seasons and 6 matches, the Olympiens have won and qualified every time, having played the first game away. The draw made OL chuckle, mostly because there were so many strong opponents left in the competition. 2 months later, the Frenchmen feel the same way: confidence, wariness and respect. Add also perhaps a touch of the thrill of the unknown, given the quality of OL’s play recently after its form slump in January. Happily, by taking the bit between the teeth, rather than through sheer brilliance, Juninho and co strung 2 wins together in a week. A great achievement before travelling to the Eternal City.

If the past can shed some light on the present, OL should remind itself of its defensive solidity in San Sébastian, Bremen and Eindhoven, OL’s 3 previous destinations. Of such solidity in fact that Coupet kept clean sheets all 3 times. This makes it so much easier later on when away goals are so dear.

AS Roma is very ambitious, having 3 World Champions in its ranks. Totti scores (18 goals in all competitions) and organises. De Rossi, I front of the defence and Perrotta, further up the pitch, are strong talents. But how can you forget Mancini, the devilish Brazilian who is simply on another level? From wingback, he has moved to the left side of midfield… and he scored, too (8 times this season). There is also the very experienced Panucci. the former Italy international has already won this trophy twice. There is also the Frenchman Mexes and the Romanian Chivu, against whom the OL of Paul Le Guen found no success when tied with Ajax Amsterdam… In short, the Giallorossi, 2nd in Italy and in the final of the Coppa Italia, are a team to be taken very seriously.

Spalletti, the manager, doesn’t have great depth on the bench and usually fields the same almost immutable formation: 4 defenders, 2 ball-winning midfielders, a line of 3 and the captain Totti in attack, making it a 1-4-2-3-1 formation. And we can also add, and this is native to Italian football, the love of tactics, the respect for instructions, the art of shutting an opponent down, the sense of drama… this team had finally put some consistency into its play and its results. The last league match, played and lost in Empoli, wouldn’t have shown anything new to the OL spies. Spalletti had to make changes to the defence, having to do without his preferred central defensive pairing of Chivu-Mexes, who are both nursing niggling injuries.

All these ingredients promise a tight match where the details will be all-important. Totti and Juninho, artists when it comes to free kicks, know it. Can the Lyonnais switch from ordinary mode to big European match mode? The answer to this question will have a huge bearing on the outcome of the match. If the Juninhos, the Abidals and Maloudas can hit their straps, that would go a long way to helping a team that’s lost the wheels from its formidable winning machine. But careful not to go too far. Cards are easily handed out in this competition and a suspension can really hurt the team. Tiago and Juninho last season, know all about it. Toulalan will have to curb himself in the role midfield enforcer. The former Nantes man has already got 2 yellows…

In a Stadio Olimpico charged with history, where Michel Jazy won the 1500m silver medal at the 1960 Olympics, 60,000 or more Roman fans will bring their presence to bear on the scenario. On this pitch, the Giallorossi haven’t lost once this season and have conceded only 3 draws: 2 in the league and 1 in the Champions League. Here, they are used to winning. At the foot of the 7 hills, the Wolves of Rome await the Lions for a clash of wild animals each trying to make the kill before the return leg… at Gerland.
Facebook
Tweet
Forum