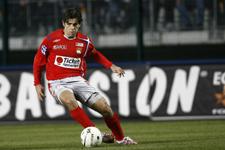 Despite OL’s good run of results in Ligue 1, the Brazilian is wary one the eve of OL’s trip to Rome to face AS Roma. Refusing to see OL as the favourites in this tie, Juninho doesn’t hide his admiration of the Roman captain Francesco Totti.
It’s with lucidity and no holds barred that Juninho looks back on OL’s January form slump. “Our journey through January was not good,” he concedes. “We went through a bad patch worse than this club has seen for five or six years. ”
In the process, the Brazilian gives several reasons that may have contributed to OL’s slump: “It happens. It’s because of poor results, playing on poor pitches. We lost confidence somewhat. When you don’t get good results, you try to do much simpler things. Recently, with the bad pitches we’ve played on, we tried to play faster going forward and didn’t challenge as hard for the second ball. We’re capable of doing it, but the true style of this OL team is keeping the ball and making the opposition do the running. If we do that, we’re always going to have plenty of chances on goal. In Rome, the key to the match will be hanging onto the ball and restricting their offensive moves”.

The native of Récif, who doesn’t try to hide his aversion for the difficult winter pitches in France, also refuses to use climatic conditions as excuses when assessing his own performances. The midfielder, who hasn’t scored since the goal rush at the Stade Bollaert on December 17, says about himself: “My standard is average at the moment just like the rest of the team. I have to do a lot more. I don’t know that I’m a barometer for the team. I’ve made the difference a few times over the last few seasons, but it’s always been the team that has played well. I think that while the team needs me, I definitely need the team.”
A team that managed to chase out the doubt that had pervaded the club since the beginning of 2007. After 5 matches without a win in the league, OL seems to have got on a better footing, with 2 wins on the trot, a performance that the French champions haven’t been capable of for 2 months and since the matches against PSG and Lens. “The last two victories did us good and I think we’re ready to take the game to them (Roma)” enthuses the OL number 8, certain that Luciano Spalletti’s men will on Wednesday show a very different face from the one that was beaten by Empoli in the league on Saturday. “Unlike us, with a victory over Lille we had to press until the end for, Roma chose to rest some of its big names. They have players who like to move the ball, who like to attack, give rhythm to their team and can turn the game at any point. They are 2nd in the Italian league. That means everything. We have to be very careful of this Roma team and Totti, one of the few true number 10s in modern football. He’s a great player. I admire him a lot,” concedes the Brazilian, who refuses to give OL the tag of favourites, “I don’t think we have any particular advantage: there are no favourites. The competition has started over again. It’s a 50-50 game.”

Extremely prudent, the Brazilian maestro relies on his European experience and is careful not to get overly optimistic. “The most important thing will be to get through. Last year, we were drawn against an Italian club. I don’t think there is much difference between Roma and AC Milan. They are 2 really good teams. Our elimination last year is proof of that. They will try to get a result in the first match and will probably push forward to score at the start of the match. As for us, we will try to achieve the exact opposite: Don’t lose and get an away goal. Even a draw would be a really good result. We mustn’t lose there.” An excellent mantra to avoid putting all your chips on the return leg and for making it for the 4th consecutive season into the quarter finals of the most prestigious of the continental competitions.
Facebook
Tweet
Forum