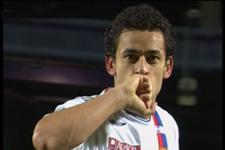 OL played 4 minutes but that was enough. Trailing until 7 minutes from the end, Gérard Houllier’s men managed to turn around a very tight position and come back from Lille with a win – something they haven’t done since season 2000-01.
After an improbable denouement, OL managed to avert the disaster that would have set in had they lost.

The trip to Stade de Villeneuve d’Ascq held a lot for Gérard Houllier and his men to learn. The first satisfaction of the evening was the effect of the win on the league table. Thanks to this late win, OL goes 14 points clear of second-placed Lens, which plays on Sunday, and leaves a gap of 18 points in front of a deserving Lille, who perhaps made a mistake in seeing in their opponent the fumbling and nervous OL of the beginning of 2007 when in fact the Lyonnais showed themselves to be pitiless and terribly effective, bearing strong resemblance to the formidable winning machine from the end of 2006. And that’s the big news of the evening in the North: though Malouda and co may not have found the full fluidity and virtuosity of their performances in the first half of the year, they certainly showed they have rediscovered the strength of character that, a few months ago, allowed them to turn around more than one dicey situation in the dying minutes. And while they cultivated, sometimes to excess, the ability to turn games around at the death, the Lyonnais had seemed in recent games weak when it came to “money time”, losing this way in Troyes and Toulouse. Tonight they were reminded of some good L1 memories. They rediscovered the warrior-like approach that made them so formidable last year. And that’s not all of it.

Another satisfaction: they were only troubled on rare occasions by Lille. In this regard, OL’s first half was very promising. In the first half, with sometimes a hint of luck, like when Yohan Cabaye’s shot hit Coupet’s crossbar (43’), Gérard Houllier’s men were very reassuring in defence, notably the central defensive pairing of Cris-Squillaci. With multiple decisive aerial interventions – notably on Aubel (27’) – the Brazilian was once again the benchmark as much for his defensive prowess as for his dangerous forays forward looking to equalise.
Poorly recompensed for its defensive rigour, OL narrowly missed seeing its efforts go completely to waste through a lapse in concentration. In a closed match poor in shots on goal, it took in the end a bit of luck and an unfortunate deflection from Toulalan’s head for Lille to open the scoring, Aubel having made the most of OL’s brief defensive error. Lille then really mobilised its attack, notably through Cabaye, whose lob grazed Coupet’s crossbar (58’).
The absence of playmakers Tiago and Juninho explains to some extent OL’s lack of attacking imagination. Replacing the Brazilian, Kim Källström was slightly out of sorts, taking several first-half shots from distance easily taken by Tony (15’, 24’) Sylva or indeed wide of the mark (45’+1).
The entry into the game of Milan Baros, which changed the formation from the traditional “Lyonnais” 4-3-3 into a 4-4-2, changed OL’s luck and afforded OL an extra sticking point in midfield but neither Malouda nor Jérémy Toulalan could get their shots on target (68’, 71’).

Up front, Fred once again bore witness to the difficulty – and the lack of chances – of playing alone up front for OL. Regularly having to drop deep into midfield to get into the action, the Brazil centre forward had to wait until the 83rd minute to create his first chance of the match. Effectively taken out of the game – sometimes illegally – by Tavlaridis, the former Cruzeiro striker had a long time to consider the prospect of a dark night barren of chances on goal… until the free kick from distance that he lashed into Tony Sylva’s net to equalise and to take his season tally to 8 goals in the league, 11 in all competitions.
And the improbable continued! Toto Squillaci turned in a Jérémy Toulalan free kick with his back to hand Lyon a victory that seemed more than unlikely just minutes before.

Just a few days before the all-important trip to Rome, the Lyon lads can look calmly to the future. The breathtaking finish spared them much anguish but also was a reminder of the sometimes onerous and inhibiting memory of the all-conquering team from 2006 that had haunted them in the beginning of 2007. One big difference: they now know the sour taste of defeat and can smell the sweet scent of recovery.