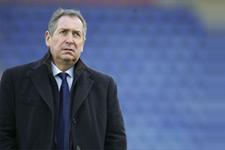 Gérard, is this a Champions League match?
“Yes. We have to Champions League matches to play in 5 days. In Lille, it will be a good dress rehearsal against a team that is always solid and competitive. The fact that OL has had slim pickings for the last few seasons in Lille? I’m not a man of the past. I am in the present and think to the future. On the other hand, I really like the term ‘revenge’ when I think about the 4-0 from last season. It’ll be no holds barred. The stakes are high for both teams. It’s a good opportunity to do some fine tuning.”

What did the victory over Lorient bring to the team?
“The win steadied the team. They saw that they can still win matches. So that’s good for morale.”

The absence of Juninho and Tiago?
“It’s not a surprise, but not so much that we’ll change our game. Fabio Santos and Toulalan will play. I’m convinced it’s the quality of our game that will take us towards our objectives. So we have to concentrate on that while showing ourselves to be strong, fast, completely under control as well as explosive… in short, playing football OL style. Even if the state of the pitches doesn’t suit us. In France, we’re behind in this respect compared to other countries like England, notably. It’s an essential tool that also makes the game more of a spectacle.”
Facebook
Tweet
Forum