OL back on track 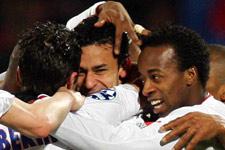 While it wasn’t a brilliant display, OL took care of the basics in beating Lorient 1-0. OL isn’t yet the irresistible steamroller it was in the first half of the season, but the machine that has been stuck in first gear since the start of the year is back on the road…
Fred and co also managed not to concede in the dying minutes, something they couldn’t do against Marseille and then Troyes. And that’s not all; OL managed to reduce Lorient’s attacking power and only allowed them minimal chances on goal. OL also managed to steady the boat and gain some much-needed self-assurance before the trips to Lille and Rome. Even though it’s hard to speak of convalescence concerning a team that never stopped believing in itself despite things being far from perfect, the performance OL gave against the Bretons is an indication that the champions are regaining confidence after a rough month.

The start of the match augured well for a gala night . As if ‘Black January’ had been nothing but a bad dream, Gérard Houllier’s players offered the fans at Gerland a first 20 minutes of high-tempo play full of attacking vigour. Juninho had the first chance but drilled his wide free kick wide of the goals of Rémy Riou, who started the match at the home ground of the team where he learned his trade (4’). From a centre from Jérémy Berthod, Morel came close to beating the keeper on loan from OL (6’). The Lorient keeper could do nothing, however, with Fred’s shot. On a clearance from Grégory Coupet, the Brazil striker turned and shot powerfully from distance to score his 3rd goal of 2007 (8’). Raiding incessantly down the wings, the Lyonnais had the measure of a timid Lorient. The team from Lyon barely resembled the side that went through January without a single league win. Squillaci (11’) then Fred (18) couldn’t break the deadlock. The 70 minutes that followed were even more serious and stressful.

Christian Gourcuff’s men toughened as OL pulled back. . Jalet’s cross went begging (30’). André-Pierre Gignac carved an opening but denied by Caçapa and then Coupet (35’). All of Gerland thought the Merlus had equalised but Saifi saw his 6th goal of the season denied for off side (35’). The Bretons had let their chance slip. They didn’t trouble the OL rearguard any further after that and in fact allowed their hosts several chance to double the lead.

At the final whistle, the ovation from the fans at Gerland showed the relief brought on by OL’s first league win in 2 months. Before Lens, Marseille and Sochaux play on Sunday, OL has a 14-point lead over second-placed Lens and cam more calmly look to its upcoming matches free of the spectre of a form slump. This season, in the league, OL hasn’t weakened in front of its direct rivals. It’s up to Gérard Houllier's men to keep up the good work, and to take it on the road to Lille.