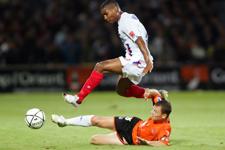 Will OL once again the don the robes of the challenger on Saturday against Lorient? A month ago this question would have seemed grotesque, with the club having reaped a record 50 points from the first half of the season and seeming to be on track for titles and more records.
Their first match of the league season, largely to OL’s advantage (3-1), played in the midst of a run of 5 wins (in all competitions), as well as the last 5 meetings between the teams (4 wins for OL and 1 draw) would seem to have confirmed Lorient in the role of designated victim. Some were even predicting a record quadruple for the quintuple champions of France. But even though mathematically it still looks good for Anthony Réveillère and co, who, thanks to the stumbling of their nearest rivals, still have a comfortable 11-point lead over second-placed Lens, the dynamic has been turned on its head, making way for OL’s form slump.

OL has had a rough January; its scrawny record of 1 point taken from 4 matches leaves it in very unfamiliar territory, a fact attested to by Gérard Houllier. “It’s a key game between first (Lorient) and last (OL)so far in 2007. In a twist of footballing fate, it’s a Lyonnais player, loaned to the Merlus, who embodies better than anyone the stunning form of Lorient. Rémy Riou hasn’t stopped shining under the bright lights of L1 since he took his place on the Lorient goal. 7 great performances in as many starts for the native of Lyon who will on Saturday achieve his life-long dream of playing at Gerland. The U-23 international won’t be the only OL alumnus to make a remarkable return. After one season at OL, Steve Marlet will meet up with the team with which he won his one French league title, in 2002. The other main attacking danger of Christian Gourcuff’s team, the multi-talented André Gignac, who has 7 goals and 4 assists so far this season, will doubtless pose numerous problems for the OL rearguard, in which Claudio Caçapa could start the match in place of his suspended compatriot, Cris.

“The Cop” won’t be the only notable absence from the OL ranks. Gérard Houllier will have to make do without Tiago, suspended, as well as Jérémy Toulalan, Karim Benzema, Sylvain Wiltord and Alou Diarra, injured. Faced with an avalanche of injuries to his engine room, the OL manager let slip that “Fabio Santos will play”. Juninho will accompany him in his first match for his new team. And should Juni’s stunning free kicks fail him, he will always have his uncanny ability to turn a match on its head. “Whether he likes it or not, he is a phenomenon,” waxes Bernard Lacombe.
After the round of international friendlies, one of the main uncertainties was the state of Milan Baros’ calf. Finally back with the squad, the Czech is in the running with Fred for the centre-forward position. With 2 goals since the start of the year (against Laon and Bordeaux), the Brazil striker hopes to get back to his irresistible form and to rediscover the rhythm that saw him score 7 goals in 12 matches before getting injured on the trip to Marseille.

OL will hit its traps again. That’s for sure! But in order not to waste a great start to the season and to have the best possible preparation for the trips to Lille and Rome, it had better get a move on. You can bet that past glories aren’t far away. “The players feel charged with a responsibility, that of bucking the negative trend,” revealed Gérard Houllier. “It will affect everything that comes afterwards. A win will be important right now but also into the future,” adds Anthony Réveillère. “The key is to win in order to rediscover the real Olympique Lyonnais.”
Facebook
Tweet
Forum