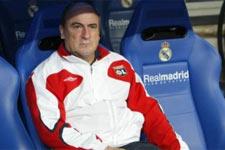 Patrices Bergues discusses OL’s form slump as well as the recent spate of injuries the squad has fallen victim to.
Does this international week allow you to work on certain things in training?
“On a team level, no, but in terms of the squad it allows us to, physically, assess the difference in match fitness for players like Fabio Santos or those who haven’t played much like Claudio Caçapa and Jérémy Berthod. For the others, it allows us to lighten their load a bit. We try to do one-on-one readjustment work. Then, as far as the technical elements are concerned, we can work on the things we’ve lost a bit of; we’ll try to work on first principles so we can find our feet and get back our confidence, because that’s what has been lacking lately.”

Has this break come at a good time?
“It could be good or bad. The chance to get out and see other horizons allows you to air yourself out, to freshen up. In times like these, a change of place and of company can be a plus.”

After a start to the season like OL had, how do you explain the current difficulties?
“If we had explanations, it would be much more simple. There are lots of small things that happened and sapped our confidence. Before, we had a winning mindset, but now we wonder whether we’re going to lose. Teams in trouble always get through it. It’s not fatal. There are reasons for it. We have to work hard and push our luck.”

When you se that other teams in the last 16 of the Champions League, like Bayern Munich and Real Madrid, are in difficulty as well, is it reassuring?
“Every team has its problems, and you have to worry about your own. You can’t reassure yourself by looking at others. If we didn’t have any problems, we would be very happy. We’re trying to get through this bad patch as quickly as possible and to rediscover our effectiveness, in defence as much as in attack. We’re not on target physically, and we’re not there at the end of matches any more. We seem to choose the difficult option when an easier one presents itself… it’s a hallmark of a lack of confidence. You need to have certainties on your game, and it’s true that at the moment, we seem to have lost that.”

In this context, does the match against Lorient take on a considerable importance?
“Troyes had considerable importance… every match is important. At the moment Lorient, Lille, Roma… Every match is important for us, and I don’t think any one match is more important than any other. It’s the context that makes it seem otherwise; for us it’s still the same match, the same drive. I haven’t seen the players show a different level of motivation for different matches. I get the feeling the players are making more effort now than they were before. And necessarily, too, because when you don’t do things well or do them in a bad rhythm, you’re obliged to do more of them. When we come together to press, we expend a lot of energy. It’s the little things… you can’t deny the part that scoring plays in the game. Maybe we’re a bit behind now but it will even out by the end of the season.”

A word on Lorient?
“Troyes and Lorient are two teams who have quality in their game and who, to their credit, are doing well at the moment. They play to win matches, and they’re well rewarded. As a trainer, I like these teams who can consistently produce high-quality games. They say to themselves that even if they have to go down, they’ll do it playing their own game with their own ideas.”

News on the injury list? “Claudio seems to be over his inflammation. He is doing well in practice matches but is wisely not pushing it too hard. For Lorient match, it’s the coach’s decision; if it’s possible, then sure, why not? On the other hand, Karim is still on the mend. As it’s a recurring injury, he has to go gently. But he is doing well, he takes part in games. He is still getting treatment, but he’s doing well. Wiltord? He’s getting better, he’s running… that’s an encouraging sign. He’s an important part of the team.”
Facebook
Tweet
Forum