An audience with President Jean-Michel Aulas 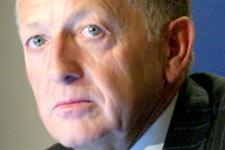 President Jean-Michel Aulas expressed his views on the current state of Olympique Lyonnais. Despite the current form slump, he remains resolutely optimistic, the more so because the floating of the club on the stock exchange has gone better than he dreamed.
What’s your analysis of the current form slump?
“To have a bad patch, you have to have had a very good one. And often we measure things not in absolute terms but in relative ones. You have to know how to put things in perspective. The slump isn’t significant in relation to what’s at stake for us. The reasons? There are surely many of them. We won lots of matches and things were going well. We told ourselves we weren’t winning easy games. There was, notably, success in front of goal. But since the start of the year, the spiral has inverted, and we’ve had less controlled, more difficult matches. I would say that there were many small things going our way in the first half of the season that have now turned the other way. But there’s no need to panic. The only significant defeat was the one to Marseille, which lost us our place in the Coupe de France. But I forgive the players for that, it was a difficult context and they finally cracked under immense pressure from Marseille. In hindsight, maybe the elimination was a blessing in disguise in terms of the hectic match schedule we have coming up. If we want to achieve our goals, maybe it’s a sign of destiny. I am calm. I know the players will be on the ball for the rest of the season. We’ve been quite sharp in recent matches. The match on Saturday against Lorient is very important. A must-win match. Personally, I am confident. The players will give their response on Saturday.”

Have the merits of the squad been called into question?
“Those merits are even more important since the transfer window, because we followed the Gérard Houllier's wishes to the letter. We did everything we could to prepare for the future; we already had a very strong basis. So we should be confident in this squad and its mental toughness. They know the challenges ahead in the league, the Coupe de la Ligue and Champions League. It’s so exciting that we can’t afford our opposition to think we will let anything go easily. There’s no question of giving up. I have no doubts. On the other hand, we have to be able to bounce back; if we can do that, the current slump won’t seem so bad.”

A word on the feeling in the dressing room?
“I’m not always privy to the details of what goes on there. I have total confidence in Gérard Houllier, who is surrounded by very competent people. There is a diversity in this squad, and that often means quality. They reacted strongly after the loss to Troyes, they weren’t happy. Reactions in the name of the collective. And that’s healthy; reactions like these, as well as those of the staff, are the guarantee of future success.”

Do you plan on speaking to the players before the arrival of Lorient?
“I haven’t done it before, it hasn’t seemed necessary to me. I spoke to Gérard on the telephone before and he asked me to come in and say a few words on Friday. It’s possible. I’ll demonstrate logically that we’re engaged in the process of getting back on track. There’s no question of finger-pointing.”

[IMG41097#R]Nonetheless, are you a bit annoyed?
“You know. It’s necessarily irritating for me. But when you have the right people in the right place, you should trust them, and this confidence should also be in evidence when things aren’t going so well. But I’m vigilant anyway, and I talk to everyone. You have to be ahead of the game to put the team in the best position. Everything is analysed and managed to consolidate our achievements and to turn things around as of Saturday.”

What’s Claudio Caçapa’s situation?
“Claudio is our captain; he has won all the titles. He has had recurring injuries that have kept him from the field. But we have a very competitive team. I spoke to him about the future a few days ago, on a question of his contract that involves a minimum number of games played in order to be renewed. I told him we would give him the option of renewing the contract immediately, ignoring this clause. There is no more uncertainty for him. Everything is in place for Claudio to return in good spirits and in a good frame of mind.”

Finally, can you tell us a bit about the stock exchange?
“We have finished our registration and the results will be announced on Friday. But I can tell you it will be a success. This project was a step into the unknown as it has not been done in France before and, despite the many difficulties, we were able to model and explain the project well. Now we are at the eleventh hour. We will establish a share price that will be in the upper reaches of all estimates. We will identify the investors who will most benefit the club, And I imagine many of them will be from overseas. We were a big hit in England, which is great. After the Conseil d'Administration, we will on Friday be visited by the patron of Euronex. We are moving towards excellence and getting closer to the big overseas clubs, while still having the means to build a new 60,000-seat stadium. This is all really good news for OL’s fans.”