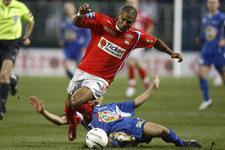 Reactions after the match between Troyes and OL.
Jean- Michel Aulas: For the moment, we have to stay calm. We seemed set for a draw but then we conceded from a corner. You have to be able to keep a cool head to analyse the match and see what was good and what was less so. We created lots of chances but then we conceded, this Troyes team played a good match.
People always worry when we lose a match like tonight. We could legitimately have hoped for a draw, but as we did against OM, we cracked at the end of the match.
Now we have to turn our attention to the Lorient match. We should be worried somewhat but mustn’t be dramatic. We just have to evaluate the situation and talk openly to get the machine running again for the clash with Roma and in order to be in form for the final of the Coupe de la Ligue. Tonight we’re disappointed to have conceded at the death but there are so many positives that we wouldn’t be very professional if we didn’t manage to get back on track. All the more so because we have a lot of good players. We have some injuries but we have a large squad. You have to be able to deal with these situations when they arise.
These poor results have no bearing on the float of the club on the stock exchange as we took pains to explain that we’re not floating on the back of results but on the back of an economic plan that we have put in place for now and for the future. So it makes no difference. We’re still in line for the league title even if we have some questions to ask of ourselves. We’re also in line for the Coupe de la Ligue, and everything is still possible in the Champions League. The stock exchange will bring considerable resource OL’s way to build a stadium and develop a second training centre; it’ll be a shot in the arm for everyone. There is no relation between the poor result of one match and encouraging economic perspectives.

Rémi Garde: This match unfortunately ended up like several of our recent matches. In substance as well as in what we managed to create in the match. We shook Troyes up a bit but we lacked solidity, the solidity that’s been missing lately and which used to win us matches. We’re lacking a bit of calmness, serenity and confidence. These ideas are hard to actually work on, they tend to come back when you win. For the moment, we just have to dig in, regroup and rediscover our cohesion. It’s not easy but there are encouraging signs.
Sport isn’t something you can master. Right now we’re asking ourselves questions just as we did when we were winning. It’s just that the answers are harder to find. We mustn’t panic but also we mustn’t just wait dumbly for things to get better. We have to make things happen, and that means we all have to do more.

Patrice Bergues: Tonight, you didn’t get the impression that Troyes dominated us, but the new lost 1-0 in the end. And what people remember is the scoreline. We have to get through this tough period, which is obviously very hard to deal with, whether one is a player, a director or a fan. If there were rational explanations, we could deal with them. We created chances. As far as our play goes, even though we weren’t at our best, we weren’t hopeless.

Florent Malouda: We’re really disappointed. Losing like that is difficult. We played a good match but in vain; they pushed hard at the end. We’re really down tonight. We played to win but lost concentration towards the end. The start of this year has seen us less fluid in our passing game. We’ve had some setbacks and bad fouls by our opponents, and this has stopped us from playing to our best.
At the moment, we’re lacking sharpness in defence and attack. Once we start getting results, the machine will get going again.
It’s not a catastrophe. We’re in the last 16 of the Champions League and the final of the Coupe de la Ligue. We just have to stick together, and we’ll get through it together. We have to roll up our sleeves and it will pay off.

Gérard Houllier: It’s big disappointment. When you look at the whole match, we deserved a draw. There is maybe some tension in the final ball that stopped us from being fluid and precise.
We’re having a tough time. We want to be the first into port but the seas is stormy right now. We’re experiencing some doubt and we’re a bit perplexed. But it will be character building and hold us in good stead for the future.