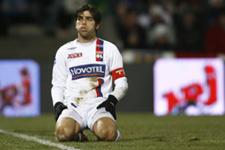 OL went down away to Troyes. In stoppage time, Nivet crucified the men from the Rhône.
Just like when they travelled to Marseille in the Coupe e France, OL went down in the dying minutes of the game. Faced with Troyes’ burning desire to make the difference at the end of the game, OL fell victim to a quality they employed to such devastating effect not so long ago, and which accounted for much of their success before the winter break.

For this 23 round of the season, Gérard Houllier brought back his trademark 4-3-3 formation. “The triangle system in midfield suits my players,” said the OL manager. Suspended for the trip to Marseille, Jérémy Toulalan was back in the Olympien engine room and didn’t wait to make his presence felt. His first shot from distance was off target, however (2’). His second shot found the gloves of Le Crom (20’).
Spearheading the attack was Fred, preferred to Milan Baros, but he was only provided with meagre ammunition for troubling the Troyes keeper. Latching onto Govou’s headed lay-off, the Brazilian shot straight at the keeper (10’) in what was his first, and last, chance for the match.
Though the Lyonnais could cite the defensiveness and frigidity of their opponents in justifying their lack of scoring during January, they certainly can’t do the same after this upset in Troyes, having now to look to their own clumsiness with the final ball to explain their inability to turn around the match against a competitive Troyes side determined to make the most of the space left to them by the quintuple French champions.
During a first half slightly to OL’s favour, Troyes bravely tried their luck, creating the best chance of the first half. Grégory Coupet calmly collected Gaël Danic’s free kick after it rebounded off the post (12’) and punched away Danic’s powerful left-foot shot (27’) before placing himself perfectly to collect the same player’s curling cross (38’).

While Troyes valiantly attacked every chance conceded to them by the OL rearguard, at the heart of which Patrick Müller has replaced the injured Toto Squillaci, Fred and co found it difficult to position themselves well. On the left, “Flo” Malouda applied himself to making the difference. The Guyanan came just short of connecting with Tiago’s centre before seeing his efforts fizz wide to the left of Le Crom’s goal (29’, 44’). Juninho tried his luck to no avail from free kicks in the 31st and 35th minutes. Patrick Müller shot at the keeper (32’) and then Cris shot over (35’) in their efforts to set the Stade de l’Aube alight.

The start of the second half sounded a warning for the Olympiens. Building on their strong first half, Jean-Marc Furlan’s men took Grégory Coupet to task. The OL keeper kept out Danic’s effort (48’) before Nivet headed wide (48’).
The league leaders quickly re-took the upper hand and put the pressure back on their hosts. Juninho and Fred fired at Le Crom (57’, 66’). Malouda and Govou scuffed their efforts on goal (68’, 71’). The entry of Hatem Ben Arfa and Milan Baros in place of Govou and Fred did little to change the increasingly fateful scenario. The Czech international missed the target (86’). Seemingly a magnet for the ball, Le Crom easily secured Malouda’s final shot (89’). As the OL strike force wasted its chances, so the fear of a deathblow from Troyes became more intense. And Nivet delivered at the very end of time added on (93’).

OL hasn’t smelt the sweet scent of victory in L1 for more than 2 months (December 17 2006 in round 18). One certainty: OL’s current rhythm won’t help them on the road to a 6th consecutive L1 title. Since their resounding 4-0 win at Lens, Gérard Houllier’s men have lost 3 times and drawn twice. Sure, they can lean on the huge lead they accrued before the winter break, but they nonetheless need to rediscover the recipe for victory, and quickly. “The road to victory isn’t a straight one,” conceded Gérard Houllier after the loss to Marseille. No doubt OL will soon find less rocky territory more suited to its ambitions. They just have to hunker down with the promise of better days ahead.