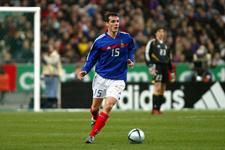 Raymond Domenech has called up 7 Lyon players for the international friendly against Argentina on Wednesday February 7 at the Stade de France.
Grégory Coupet, Eric Abidal, François Clerc, Sébastien Squillaci, Jérémy Toulalan, Florent Malouda and Sidney Govou have been retained by the France selector.

While Coupet (23 caps), Abidal (19), Govou (25) and Malouda (25) are a regular part of the France line-up, Sébastien Squillaci (10), whose last appearance in the blue shirt dates back to September 3 2005 against the Faroe Islands, is rewarded for his strong season with OL.

Also of note, Toulalan (1 cap) and Clerc (2) have received the call-up as well.

this brings the total number of OL players representing their respective countries to 13 (7 Frenchmen in the first team, 1 in the U-23s; 1 Brazilian; 1 Portuguese; 1 Swiss; 1 Czech; and 1 Swede).

Hatem Ben Arfa and Rémy Riou (on loan to Lorient) have been called up by René Girard for the friendly match between the French and Swiss U-23 teams on Wednesday February 7 in Nîmes.
Facebook
Tweet
Forum