Juninho recognised by the USJSF 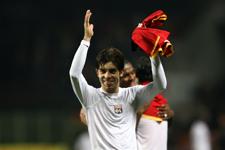 The Union Syndicale des Journalistes Sportifs de France, which comprises almost 2,500 members, has chosen Juninho, captain of Olympique Lyonnais, as France’s sportsperson of the year for 2006.
A first in the history of the award! Never has a footballer nor a foreign sportsperson won this award that recognises a man or woman who has stood out during the season while maintaining an excellent relationship with the media.

Juninho, who finished ahead of Laure Manaudou, Amélie Mauresmo and Sébastien Loeb, succeeds Loeb, who was crowned in 2005. The Brazilian footballer will be honoured on march 27 at the Hotel de la Région des Pays de la Loire during the national congress of the USJSF, to be held in Nantes.
Facebook
Tweet
Forum