Some stats after Nice 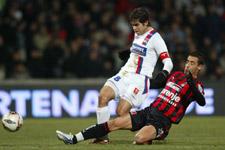 OL missed its second league penalty so far this season. After Juninho against St-Etienne, Fred did the same against Nice. 2 from 3 for OL. Only Benzema has put his spot kick away. Benzema also fired home from the spot in Trophée des Champions (PSG). Attacking and defensive clout? In the last 4 matches, OL has had 88 shots for 2 goals, that’s 1 goal every 44 attempts! And the league average in the last 4 matches has been 1 goal every 8 attempts… conversely, OL’s opponents have scored 5 goals in 4 matches from 20 shots… that’s 1 goal every 4 attempts, while the league average is 1 goal every 14 shots. This trend is also apparent when looking at the stats from January. 1 goal scored from 17 shots and 1 goal conceded for 5 shots by opponents.

The trend even applies to Juninho, who has scored 9 goals this season. Before Monaco, he had scored 8 goals in 77 attempts for a rate of slightly over 9 shots per goal scored. Since Monaco, he has scored once in 26 shots…
Facebook
Tweet
Forum