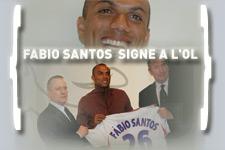 Fabio Santos:
What was it that didn’t work out in your first European stint and why do you feel ready to try again now?
I couldn’t adapt to Nacional Funchal because it was a small team from a small town. I also had problems with my salary, and chose to return to Brazil.

were you familiar with OL before arriving in Lyon? Had you met any OL players?
I had heard Elber talk about OL.

Is it reassuring that there are other Brazilians at OL?
Yes. It’s important because it means that adapting to the style here will be easier. Coming back to Europe was a dream for me. OL is a big club that keep winning titles. I hope that continues.

Do you feel ready to play?
I’m ready. I’ve been training for a month. I made my return in Brazil, where I played in some friendly games. If the manager needs me, I will be ready. I know OM is a big rival of OL, and I’m used to playing big games like that in front of lots of people.

What prompted you to sign Fabio Santos?
Little snags along the way led us to sign Fabio dos Santos Barbosa for the sake of prudence and being forearmed. You have to cater to every possibility – we can’t afford to let what we’ve worked for disintegrate. We wanted an extra midfielder because of the injury to Alou Diarra and the yellow cards accrued by Jérémy Toulalan. Fabio Santos will bring technique, power, his defensive game and his sense of marking to OL. I won’t deny that I was looking at Jérémy Clément but he preferred to go to PSG. Jérémy had the advantage of knowing the team, he could have been the player we are looking for.
Bernard Lacombe spoke to me about Fabio Santos. Like Cris, he has had European experience (at National Funchal in Portugal) that was short-lived. It’s a good sign. In any case I’m happy to have Fabio here. He could be a real surprise.

do you think he might play against OM in the Coupe de France on Wednesday?
I think he will be cleared to play by then, so he will make the trip with us.

Has OL’s transfer activity finished for the time being?
Yes, I can confirm it’s over for now. I’m satisfied, this is what I wanted. We made an exchange between Carew and Baros that will be beneficial to both clubs.

[IMG41796#L]Bernard Lacombe:
What can you tell us about Fabio Santos?
I followed him when he was at Sao Caetano. I saw him when I went to watch Marcelo, a young left back, and I found him to be an excellent player. He played something like Alou Diarra, Djila Diarra and Jérémy Toulalan. He has a bit of all of them. He made me think of Jean Tigana only with more power. He also has a good shot on him.


Read the dossier on Fabio Santos