Before the Olympic clash in the Coupe de France 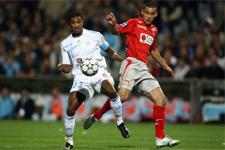 While OL hasn’t won at the Vélodrome in the Coupe de France, it remains undefeated by OM in the league since 1997-98, when OM won 1-0. Since that season, there have been 5 draws and 4 OL victories, 2 of which featured a scoreline of 4-1.

OM has lost twice at home this season, against Lyon (4-1) and against Lorient in round 12 (1-0). For the rest of their home games, Beye and co have recorded wins… 8 of them and counting…

OM was knocked out of the Coupe de la Ligue by the Greens (St-Etienne) at the Geoffroy-Guichard stadium in the last 16 (4-1, goal to Pagis from the penalty spot) after having beaten Montpellier at the Hérault stadium 2-1 (goals to Bamogo et Maoulida).

In the UEFA Cup, Albert Emon’s men went through the Intertoto Cup by eliminating Dniepr. After that, in the preliminary rounds of the UEFA Cup, they knocked out the Young Boys before being taken out by Mlada Boleslaw. Notably, they didn’t win at home: 2 draws.

[IMG39621#R]In the league, OM has 36 points, 15 behind OL; they are 4th on the table. They have a better home record, with 24 points from a possible 30. Carrasso and Beye have played every minute of every match. Niang, Taiwo and Zubar 21, Nasri and Maoulida 20, Cana and Pagis 19, M’Bami 17… Cissé has only played 6 matches. As for Rodriguez, who came during the transfer window, he has played 3 matches.

Pagis is OM’s top scorer with 9 goals in all competitions alongside Niang. They are followed by Maoulida 7, Bamogo 5…
Facebook
Tweet
Forum