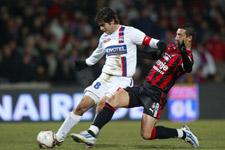 Reactions after the match between OL and Nice.
Rémi Garde: IN terms of the numbers ,we really flagged tonight. Nice showed more heart and quality than their ranking would suggest. I’m disappointed for the players, who deserved better. We had a lot of bad luck. We created a lot of chances in the second half.
We too had a lot of drive in the match but we just couldn’t convert. We don’t seem to have the power to get past our opponents. We knew we would have a tough period at some stage, but we didn’t think it would last this long. But we will keep trying.
We are sure to get a hostile welcome in Marseille but it’s in moments such as those that players can get the best out of themselves.

Florent Balmont: We really wanted to get a point or more so we’re really happy with this draw against Lyon.
I’ve been in L1 for 4-5 years, and I just do my job. We tried our best, without shutting the game down, to climb a few places up the table. We did our best tonight, but it was really tough, because this team has considerable resources. I wouldn’t worry if I were at OL. Everyone has bad days. I’ve been watching them on TV in the Champions League and it’s a pleasure to watch them play.

Milan Baros: We could have scored a lot more goals. The goal? Sidney took two players out of the game and then another three handed me the chance, it wasn’t hard. It’s just a shame it wasn’t a winner.
The surface was pretty soft, which was tiring, but for both sides, so we can’t use that as an excuse.

Patrice Bergues: It’s a tough moment. In terms of the quality of our efforts, we have no complaints with out players. We simply needed to convert them. Our confidence has slipped slightly. The penalty is symptomatic of our current goal scoring problems. We have to continue to work hard. At the moment. Every mistake is costing us dearly. We can’t seem to turn domination of matches into goals.

Gérard Houllier: Teams that come here have nothing to lose. We are more adventurous than our opponents but unfortunately our domination is sterile. In the league, there are always tough times. I knew the championship wasn’t over. Also, when you’re the leader, mistakes are always highlighted and criticised. We have to snap out of it. The next match will be in Marseille. I don’t know if it will go well. We’ll see after the match.

Jean-Michel Aulas:
It’s an habitually tough time for us. Last year, we had troubles at this stage as well. We have to stay calm and stick together. I think we’ll bounce back, that everyone will get going again soon. During January, we will have had 4 big cup matches. We’ve won 3 already and the 4th is this one in Marseille. It will be decisive.
One of the good points of the night was the great performance from Milan Baros, and we should capitalise on this. At some point, things will take off again. You have to hit a low point in order to bounce back. I’m not worried.
I’m slightly irritated by not winning everything, but sometimes bad moments make you better.
Regarding the float of the club on the stock exchange, it’s a project that will do the club good and allow it to compete with the other big European clubs. You have to have the means to achieve your goals. It’s a 6-year project. It’s been as much of a success financially as it has in terms of publicity. We will set the benchmark for such projects.

Juninho: Tonight we drew, so another game without a win, even though many people thought playing Nice would be easier than the matches against Toulouse and Bordeaux. That’s what makes football such a passionate game, you never know what can happen! Tonight, we lost as a group, and we will do everything necessary to get a good result from our next match. It makes sense to be disappointed, we have made accustomed everyone to see us win, ever since the first game of the season, in the league or the Champions League. A dip in form, that happens. The essential thing is not to let our rivals gain on us, because or calendar for the second half of the season is very full.
Will the Marseille game trigger a comeback? I don’t think a good result in Marseille will necessarily trigger a return to form because for us, the next match is always the most important. It’s simply a tough time that we have to work through together. It will be a huge match. They lost this afternoon and will want to get back to winning ways against us. OM puts a lot into the Coupe de France. So, may the best team win… and may the best team be Lyon.