One point, that’s all 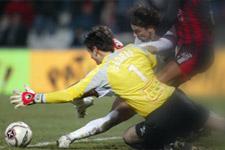 OL conceded a 1-1 draw to Nice. Milan Baros got the equaliser after Koné opened the scoring. Before the Lens game on Sunday night, OL has a 15-point lead on it’s nearest rival, LOSC.
Just like against Toulouse and Bordeaux, they dominated the game without being able to secure it, and once again conceded a goal on the counter.

We are never beaten, we beat ourselves. Since the return from the break, OL has found it difficult to reap the rewards of its domination of games without sharing the spoils. In a 7-minute period, Gérard Houllier’s men saw the demons of Toulouse and Bordeaux coming back to haunt them. Visibly more motivated by the desire not to lose than any desire to get closer to Grégory Coupet’s goal, Nice hadn’t the slightest chance before Jérémy Toulalan deflected Apam’s deep ball into the path of Bakari Koné. From the edge of the area, the Ivorian calmly lobbed the France keeper (34’). Meanwhile, OL continued to create a plethora of chances while dominating play. Had it not been for an inspired Hugo Lloris, Cris and his team-mates would probably have made the difference quite quickly.

The men from Gerland reflected a few minutes before getting Milan Baros in a good position. In his first start at the apex of the OL attack, the Czech had his first chance in the 12th minute, forcing a fine save from Lloris. After 20 minutes of the game, Cris had had the most chances with 4 efforts. A very loose shot by the OL central defender from 25 metres (5’) was followed by an off-target header (7’), then a powerful header superbly tipped out for a corner by Lloris (19’) and a shot deflected by Ederson (20’).
Working hard at the front of the OL attack, Milan Baros did everything he could to offer a solution to his colleagues. After a one-two with Kim Källström, the Czech came ever so close to scoring his first OL goal but screwed his shot wide to the right of the post (22’). But this was just a raincheck. On his right side, Sidney Govou wreaked havoc on his defenders. After a jinking run in the area, the France international centred for Milan Baros, ideally placed in the 6-yard box. With his left foot, the quintuple French champions’ new recruit trumped Lloris to allow OL to go into the break deservedly on equal terms (41’).

The start of the second half saw Nice create its second and final chance of the match. The OL defence blocked Troaré’s shot (47’) and the rest of the game went decidedly in favour of the hosts… and Hugo Lloris. After Govou volleyed wide (56’), the Nice keeper denied OL number 14 (58’), then stopped Baros twice at point blank range(59’ and 67’) as well as Malouda (59’) to confirm, at just 20 years of age, his undeniable talent.
OL thought it had found deliverance when referee Mr Thual pointed to the spot after Apam fouled Hatem Ben Arfa, but Fred steered the spot-kick wide (79’). Houllier’s men had let their chance slip. Neither Kim Källström from distance (86’) nor Florent Malouda, nicely put through by Sidney Govou (90’), nor Fred, whose shot flew into the night sky above Gerland (90’), could make the difference in the dying seconds, leaving OL to nurse its regrets. One statistic sums up the difficulties OL is experiencing at the moment: OL had 20 shots on Hugo Lloris’ goal for one goal scored, while they conceded 6 shots by Nice for the same result.

All-conquering in the cups, OL have been stuck in second gear since the start of 2007. despite only taking 2 points from the last 4 matches, OL still has a comfortable lead over its pursuers. The ‘Gones’ have to get back on track fast to avoid being put under pressure by their rivals. No time to ponder imponderables, they have to turn things around by Wednesday for the trip to Marseille…