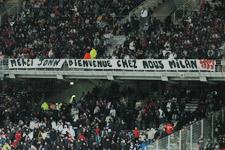 “Thanks John, welcome Milan”. It was to this message from the ‘Lugdus’ and the flags of the Northern Stand that OL took the pitch at Gerland.
John Carew, always the gentleman, passed through OL’s headquarters a few hours before the match to shake a few hands and say goodbye, and he was met with many “thank yous”.

While Milan Baros left Aston Villa and arrived in Lyon at the start of the week, John, with a smile, undertook the exact opposite route.
Saturday afternoon, Aston Villa beat Watford in Milan Baros’s last game on the other side of the Channel. A flight, a press conference and a training session later… having changed uniform, language and team-mates, the Czech international found himself on the OL bench at Gerland… in front of the OL fans.
After the break, the new OL number 7 accompanied Ben Arfa and Källström under the Northern Stand to warm up before taking his first steps on the pitch at Gerland on the hour mark, replacing Jérémy Toulalan.
Working for the team, his runs troubled the Bordeaux defence; his pass for Kim, just entered into the game, missed the target (73’); just as his header from a Juninho corner and his tackle at the edge of the 6-yard box, in the final seconds of the game, failed to find the back of the net by mere centimetres (81’, 93’).

With thunder in his shots and his quick adaptation to the OL game, has already shown potential that gives Gérard Houllier another excellent attacking option for the glut of games to come.