Bordeaux puts the freeze on OL 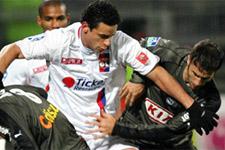 The Girondins de Bordeaux dominated OL 2 goals to 1. Despite this first home loss of the season, OL still has a 14-point lead at the top of the table.
At the final whistle, the joy of the Bordeaux players befitted the calibre of their winning performance on the home ground of the five-time French champions. Thanks to excellent finishing and penetrating teamwork, the Girondins inflicted in OL its first home loss of the season. Willing and courageous in the second half, OL couldn’t pull back the 2 goals that had punctuated a first half during which they seemed uninspired in attack and scatterbrained in defence. OL went largely missing in the opening stages of the game, rendering their task all the more difficult
The Girondins put their plans into action to quickly go 2-0 up. The first chance for Bordeaux threw a chill over Gerland, already icy from the wintry temperature. Perfectly released deep behind the defence by Francia, Darcheville clattered into Rémy Vercoutre at the edge of the area, offering Francia the opportunity to open the scoring with a penalty (2’).
The second blow from Ricardo’s men ended a first half hour during which Mavuba and his colleagues managed to bend without breaking under OL’s attacks before speeding off towards Rémy Vercoutre’s goal. Marange placed his cross on the head of Johan Micoud. Alone in the area, the French international calmly slotted past the OL keeper to score his 3rd goal of the season (28’). And OL had been warned; a few minutes beforehand, Perea completely forgot Alonso to his right, wasting a delectable two-on-one by shooting over (25’).

At half time the Girondins hit the dressing rooms with a 2-goal advantage, a deserved lead in terms of the manifold errors committed by the hosts, but flattering in terms of the efforts deployed by Malouda and co. Causing all sorts of trouble on the left flank, the man from Guyana had the upper hand on Jurietti. His bursts of pace and dribbling combined with the strong back-to-goal work of Fred offered up many chances for Juninho from free kicks in dangerous areas. The Brazilian didn’t manage to find the target (10’, 21’, 22’) of found his way to goal blocked by Ulrich Ramé, who was in superlative form (5’, 13’, 30’). No luck for OL’s number 8 again when, on a cut-back cross from Abidal, he volleyed from the near post only to see his shot spectacularly pushed wide by Ramé (17’). Climbing at the near post, Cris couldn’t find the target either with his headers (35’, 40’).

The start of the second half could have been mistaken for the start of the match, with the exception of Rémy Vercoutre’s fingertip save from Alonso (48’). Grégory Coupet’s understudy stood up again a few minutes later, keeping OL’s hopes of an improbable comeback alive (60’). OL redoubled its efforts and threw everything it had into the battle.
Sidney Govou hit the post (50’), Fred shot wide (53’) and then Malouda fired straight into the hands of Ramé, giving glimpses of a glorious comeback. And glimpses they remained, as only Fred managed to get past Ramé, getting his head onto a Juninho free kick and rekindling hope in his team and signalling the kick-off of a white-hot end to the game (64’). Sidney Govou (70’) and then Kim Källström with a thundering shot over the bar (74’) couldn’t get their shots on target. Then Juninho flubbed his one-on-one with Ramé (75’). In stoppage time, Milan Baros couldn’t quite reach a ball that Cris had almost put home (90’). Even though OL will be left wondering what could have been had this last chance of the match been maximised, it can’t detract from the victory achieved by the Navy and Whites.

In staging this victory, the Girondins sent more than one message to their hosts at Gerland. First of all, they put OL on notice for the final of the Coup de la Ligue on March 31. OL will certainly now have a better idea of what they will face in that match. If OL wants to take out the first trophy of season 2006-2007, they will have to play to the most of their ability�� and hope for some more success in attack.
Ricardo’s players also reminded OL, contrary to what many have claimed, that the championship is far from over. OL still has a 14-point lead on its nearest rival, OM, but the road to the title is peppered with obstacles that must be overcome with humility and application.
Facebook
Tweet
Forum