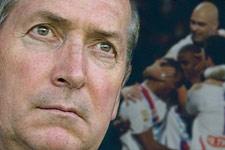 Could the upcoming final of the Coupe de la Ligue have an impact on this match?
“It doesn’t change anything, especially as it’s 2 months off. This is simply an important game for us after taking one point from the last 2 rounds of L1. Not a very glorious record. I knew it would be tough in Toulouse but I never thought we would lose. The point against Monaco wasn’t so bad considering the state of the pitch. I am very grateful to the City of Lyon for having done what it took to give us one of the most important tools we need to work with. A good surface is crucial in order to play well.”

How do you see your team’s game at the moment?
“Since the break, we have rediscovered most of our rhythm and sharpness from the first half of the season. Against Le Mans, for example, we were very good in parts, and since then we have worked really hard, especially during the break. We just have to get through this month and we will be better than at the start of the season.

Bordeaux?
“I remember in the first half of the season, we were received very badly in Bordeaux. Our arrival at the stadium as deplorable, which had a positive effect on our behaviour. The draw against Toulouse was also good for us. I felt against the Girondins that the players had a new hunger, which is the hallmark of super champions. So, after the loss to Toulouse, we are in a position where we must bounce back.”

The match?
“First of all, we must win. I might remind you that the number one objective is the 6th consecutive French title. Everyone seems to have forgotten that.”

Could the integration of Baros pose a problem and change your selections?
“No, because with such a good team, it’s easier. Milan still has the same qualities he had at Liverpool and he has strengths that our other attackers don’t. Fred? He has nothing to worry about. John was replaced by Milan. The competition remains the same, maybe a bit sharper. In any case, competition is useful. Everyone contributes to the team’s success. And the football at Lyon is even more collective than elsewhere. My tactical choices? I can assure you that we won’t play with two strikers against Bordeaux. There are two schools of thought: in one, the manager has his system and places the players in it (the Dutch team, Sacchi…) and in the other, the system is adapted to the players. I prefer the latter and I am very pleased with our current system.”
Facebook
Tweet
Forum