A clash with Bordeaux… and it’s on again 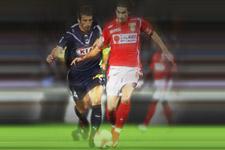 After a week dedicated to the two national cup competitions, including qualification for the final of the Coupe de la Ligue, Bordeaux and OL return to league competition. Juninho and co need to get back to winning ways in L1…
Football can produce some strange coincidences. One week after victories in the Coupe de la Ligue, Bordeaux and OL will meet at Gerland 2 months before they face off in the final at the Stade de France. But this league match between Bordeaux and the five-time French champions is more than a rehearsal, it’s an important game in its own right. Let’s not forget that these 2 teams are the only ones in France still in the running in 4 competitions. And while OL dominates the league, Bordeaux needs to climb the table in case the Cups don’t assure it a place in Europe next season. As for OL, the title seems to be theirs, but isn’t yet definitively acquired; OL has only 1 point from its last 2 matches and no goals. This isn’t the sort of thing the Gerland faithful are used to!

Ricardo’s squad doesn’t have the defensive solidity it had last season, when it finished the season with the best defensive record in L1: 25 goals conceded and 22 clean sheets. Impressive. Things are different this season, however, with keeper Ramé already picking the ball out of the net 23 times. The arrival of Micoud hasn’t brought the boost to the team it was meant to and the forwards aren’t firing. This gives the impression that the Girondins are tinkering just to get mediocre league results. Faubert, Chamakh, Jemmali, Smicer et Fernando won’t make the trip to Lyon.

OL is on another planet completely, with a lead of 20 points over its visitors… But OL hasn’t won nor scored in the league since its trip to Lens. Sure, that’s just 2 matches and 1 point and OL has hardly conceded any of its huge lead at the top of the table. But if it continues… Gérard Houllier rested Juninho, Tiago, Abidal, Cris and, largely, Govou and Malouda against Laon. These lads should start the match on Wednesday night, and we should see Baros on the bench. Diarra, Benzema and Wiltord are still recovering from injury and Coupet will be back very soon… Cacapa and Berthod are on the comeback trail and there are 4 matches to play in 2 weeks.

OL hasn’t yet rediscovered all its splendour from the first half of the season. The fans hope such form will return so the club can throw itself into the task of achieving all its objectives. And they will have a chance to see their heroes twice in four days, with Wednesday’s visit by Bordeaux followed by the arrival of the Aiglons de Nice on Saturday night. It seems it’s tough to win two games in a row at home, especially as their opponents both need the points, albeit for very different reasons. But OL has good form in this kind of match.

Last season the 2 teams drew 0-0 in a closed match that didn’t really grab the spectators. Let’s hope for something completely different this Wednesday night, and above all, many more positive points from Lyon.
Facebook
Tweet
Forum