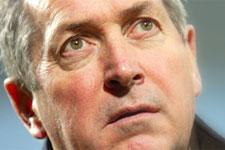 Reactions from Gérard Houllier, François Clerc and Claudio Caçapa following OL’s victory against Laon
Gérard Houllier: Tonight, the team really over-complicated their job against Laon. We should have scored one or two goals in the first half, and I can’t understand why we didn’t. Laon was highly motivated by the idea of playing us and put up a great fight. Qualifying was essential for us. As of January 20, OL is still in the running in all competitions.

François Clerc: I’m really stoked to have scored my first professional goal. Sure, I celebrated, but I would much rather be celebrating it at the end of the final at the Stade de France
Playing amateur teams isn’t easy. We didn’t make the most of our chances in the first half, but got back on target in the second.

Claudio Caçapa: It’s always tough to play amateur teams because they are so pumped up for big occasions. But it’s the Coupe de France. It was tougher than against Bayonne but the objective was the same: qualification!
I’m really pleased that Fred has started scoring again…
Facebook
Tweet
Forum