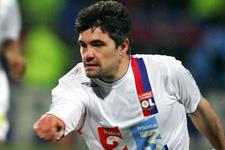 The former Nantes player received his 3rd yellow in 8 matches, and will be suspended...
In fouling Romaric, the OL midfielder was sanctioned by Mr Kalt, the match referee for OL-Le Mans. Carded against Le Mans and Monaco, Jérémy will be suspended soon (Bordeaux? Nice?). Tiago joinedJuninho with 2 yellows in less than 10 matches; they are both under the threat of suspension if they get another card.

In the Coupe de la Ligue, it’s the only competition of the season in which OL hasn;t scored directly from or following a set piece. That’s 6 goals in open play.

Malouda made his 3rd assist of the season; his 2nd in the Coupe de la Ligue after putting Govou through against Nancy. Vercoutre loves the Coupe de la Ligue. Since his arrival at OL, and taking into account his season at Strasbourg, 4 games, he hasn’t lost a single match in match-time (a loss on penalties in 2005-2006 in Nantes and the first half at Lens in 2003 before going off injured). With Strasbourg, he won the final in 2005 against Caen.
Facebook
Tweet
Forum