OL gets its final 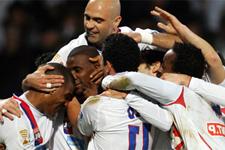 OL will play Bordeaux in the final of the Coupe de la Ligue on March 31. A favourable draw gave OL three home games in a row before the final at the Stade de France.
Gérard Houllier’s men didn’t miss the chance to set up the possibility of a second Coupe de la Ligue victory, 6 years after their last winning final against Monaco in 2001.

Proof of the commitment Gérard Houllier has for this competition: the starting 11 was identical to the team called up for the visit of Real Madrid on September 13, 2006, save for Rémy Vercoutre being in goals for the injured Greg Coupet.
After their loss in Toulouse, OL’s response was the focus of much attention. In a one-way match, the five-time French champions availed themselves of their capacity to come through in tough moments, dominating the game from end to end, imposing themselves on a sharp Le Mans team that in the end was far to timid to imagine leaving Gerland victorious. Faced with an OL that had hit its straps again, Le Mans only rarely showed signs of being able to get in the way of the TGV from Lyon that had obviously decided to win its first cup trophy since getting their hands on the French league title.

Impatient to taste the air of the cup final, OL only allowed their opposition slight hope for the evening. Sessegnon had the first shot of the match, well caught by Rémy Vercoutre (1’). Romaric tried his hand at free kicks with no more luck, shooting over (10’) and then at the keeper (38’). Which was better than the men from Toulouse, who had waited 63 minutes for their first chance, which turned out to be their first goal. The problem for Frédéric Hantz’s men was that Juninho and co managed to find the opening through Eric Abidal’s first goal of the season. Latching onto a deep pass from Florent Malouda, the man from Martinique beat Yohann Pelé with a powerful shot (22’). This was just desserts for OL, which had dominated the first half. Florent Malouda had a powerful effort saved in the 2nd minute, while Fred shot short in the 5th and 15th. Malouda just missed a deflection from Govou (18’) and Juni fired his free kick wide (17’) before seeing Yohann Pelé palm his efforts wide in the 20th and 34th minutes. The much called-upon local keeper was needed again soon after to save from Tiago, who had latched onto a pass from the effervescent Malouda (33’).
OL’s lead could have been even greater had the referee, Mr Kalt, not unjustly disallowed Fred a goal for off side (19’).

OL couldn’t manage to kill the game off in a first half it dominated. And without a brilliant Rémy Vercoutre in goals, they could well have been made to regret it. Matsui and Samassa had their shots saved by the OL keeper’s feet before Sessegnon shot wide (52’).

OL went after the goal in the second half. Réveillère, put through by Tiago, hit the post (57’). Perfectly assisted by Malouda, Sidney Govou couldn’t get his shot on target (59’) and Fred didn’t get enough power behind his (63’). Juninho’s cross got behind the defence but found no attacking takers (68’), while shots from Cris and Toulalan went wide to the right (80’, 88’). Unable to effectively pull the trigger on the final ball, OL was also dealing with an impeccable Yohann Pelé, who made an amazing reflex save to stop the ball going in off Basa for an own goal after a cross from Clerc (79’). Le Mans’ last bastion saved again, this time a powerful shot from Govou (86’).

Not worried but anxious to see their team go through, the fans at Gerland shouted, sang and jumped until the final whistle that saw their heroes go through to the Stade de France. OL won it’s first home game of the year – still the toughest, and the best.
Facebook
Tweet
Forum