What’s in the papers: Tuesday the 16th 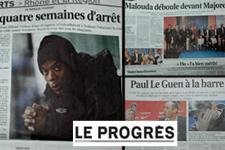 The football press has focused on the appointment of Paul Le Guen as new manager at PSG. L’EQUIPE devotes 4 pages to the change. The sports daily reviews all the PSG managers since 1973. One figure: 16 different coaches.
[IMG41303#L]Aujourd’hui en France doesn’t miss the arrival of the former Rangers manager in the capital. The daily revealed the news of his appointment in yesterday’s edition. This morning it explores the story behind his arrival just after the defeat at Valenciennes and poses one question: “Le Guen: Can he change everything?”
At the end of the article: a photo of Guy Lacombe cleaning out his office.
Of more interest to OL: the stadium at Reims where OL is set to play Laon on Saturday is still being refurbished: 9,236 of the 22,000 promised seats are available.

[IMG41306#L]In l’Equipe and its “Transfer News”, Piquionne admits his desire to leave Saint-Etienne: “Things have broken down and I don’t want to play at Saint-Etienne any more; I have lost confidence in my directors. I want to leave and I want to go to a big club. Today, it’s Lyon who is asking. What player wouldn’t want to go to Lyon?”
Other transfer news in the daily: Baros is still in OL’s sights, the Czech having the advantage of not being cup-tied for the Champions League…

[IMG41305#L]Le Progrès also opens with a piece on Piquionne: “I’m the victim of a dispute between Saint Etienne and Lyon,” Piquionne says, talking about the directors of his current club. He insistently uses the phrase, “They haven’t respected me as a man. I may be black but I am not a slave”.
On the same page, Le Progrès discusses the medical condition of Sylvain Wiltord, the latest injury to date: 4 weeks out of the game.

[IMG41304#L]France Foot compares the statistics of the five big European leagues (Germany, England, Spain, France and Italy) from the first half of the season. It reveals that OL has the best defence, ahead of GETAFE and Manchester United… in terms of attack the best is WERDER ahead of Barcelona. The biggest score racked up by any team in Europe in the first half of the season is the handiwork of ROMA, OL’s next Champions League adversary. Roma won 7-0 in Catania in round 11. Catania was placed 6th at the time and Roma 3rd…