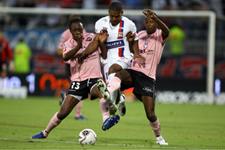 As far as returns from the break go, this was a tough one for OL. Faced with a Toulouse side that managed to bend but not break for the first hour, Juninho and company couldn’t find and opening and ended with their second loss of the season.
Hosed by Douchez and crucified by Elmander, OL went down to Toulouse despite largely dominating the first half. After getting a draw in the dying minutes at Gerland in round 2 of L1, Elie Baup’s went one better in winning 2-0.

Unlike the last 3 times OL has visited the banks of the Garonne, the men from Lyon couldn’t bring back the 3 points from the Pink City. The Toulousians waited patiently for their time to come and scored with their first opportunity of the match.

The TFC goal was a long time coming. The only change to the normal OL line-up, Rémy Vercoutre wasn’t bothered in the least by Toulouse until the 47th minute. On a patchy pitch, the start of the game saw hosts Toulouse consistently losing the ball to OL. With an unheralded and familiar back line, TFC held firm during the first OL incursions. Nicolas Dieuze came full circle in his “tour of duty” of every position on the ground. He began his career as a striker versus PSG in October 2000 and began this match in the centre of defence, replacing the ill Dominique Arrabagé. Faced with a solid defensive block, OL were at pains to even trouble Nicolas Douchez.

Sidney Govou scuffed his shot from the edge of the box (5’). After a clever one-two with Florent Malouda, Fred’s shot was blocked by Dao (19’). After a Juninho free kick, Govou shot over (28’). Florent Malouda did the same with a powerful 20m shot soon afterwards (34’). Fred came agonisingly close to connecting with the Guyanan’s cross (36’). Toto Squillaci fired wide with a header from the a Juninho corner in the 41st minute.
On the right wing, Sidney Govou gave Cherfa the run-around. With his burst of pace and change of direction, Govou was easily OL’s greatest weapon. After a mazing dribble, his left-footed effort was just touched away by Douchez (37’), for OL’s best chance of a half they dominated without being able to break down the local keeper.

After the break, TFC raised their game a few notches. Achille Emana forced Rémy Vercoutre to save with his feet in the 47th minutes and Cherfa shot fairly wide (56’) before Ebondo brought out a fantastic save from the OL keeper with a stinging shot (62’). Laurent Battles and his team-mates steeled themselves, pushing until they finally opened the scoring with a goal very similar to the one scored by Fabinho when the teams met in Gerland in round 2. After breaking down the left, Elmander centred for Emana, left free on the edge of the 6-yard box (65’).
Trailing, OL pushed ahead again. Govou found Malouda from the right after a deflection from Fred, who skied his shot into the night (67’), before Dieuze blocked another Govou effort. Hatem Ben Arfa couldn’t find the target (79’ and 81’) and Nicolas Douchez punched away a Juninho free kick from wide (80).
The game seemed to trailing off when Elmander set off on a jinking dribble and beat Vercoutre for the second time of the night, with a “tackled” shot (85’). Douchez capped off his superb evening by parrying yet another free kick from Juninho.

Despite this defeat, OL is not panicking, still enjoying a 14-point advantage over their nearest rival after 20 rounds. Anyway, there is not time to think too hard on it, as OL has to pick itself up for the quarter-final of the Coupe de la Ligue against Le Mans on Wednesday.