The OL squad for Toulouse 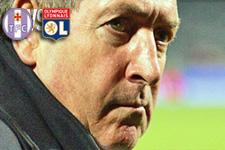 What’s your inspiration as the season resumes?
“It’s a new championship from here on out, everything is back to zero. We want to finish on top at the end of the second half of the season, like last year. The danger? Relaxing. Not to mention our opposition, because it always wants to put in a special performance against us. Our opponents have nothing to lose and their players want to make a name for themselves. We have to start the year as well as possible with a good performance and a good result. Toulouse? They took two points from us at the start of the season, which spurred us into action for the trip to Bordeaux. We’re coming off a draw with Monaco. We’re in the same situation and the same spirits.”

How do you see the second half of the league season?
“The second half will be tougher than the first, and as such, more exciting. Our opponents will have improved. They play their match of the year against us. Also, the title race is never easy. The priority is to defend well… for the rest of the season. Changes after the Bayonne match? (Smiling) Cris has a chance to play…”

A word on your current squad?
“I have two keepers in whom I have confidence. Rémi brings calmness and assurance and the young Bouchard has a lot of personality. Fred? He is yet to hit his straps. But he was much better this week in training. [IMG41689#R]In fact, it’s like he is at the start of the season, so it makes sense that he is a bit rusty. Benzema? It’s worse than we thought; it’s a recurrence and We think it will affect him for 6 to 8 weeks. As for our schedule, we have 7 matches to play in 22 days.”
Facebook
Tweet
Forum