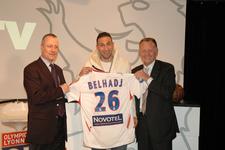 Nadir Belhadj was officially presented to the press on Wednesday. He will be Lyonnais for the next four and a half seasons, but has been loaned back to Sedan for the rest of season 2006-2007.
So, the Sedan left-footer is now at OL, President Jean-Michel Aulas confirmed at a press conference in the studios of OLTV.

“Bernard Lacombe followed this player for several seasons. We had the opportunity to strike this deal and to do it quickly. Discussions went very well with Sedan and its President Pascal Urano. Nadir signed for four and a half seasons. We will loan him to Sedan until the end of the season. The transaction cost 3,240,000 euros. During his loan period, he will be taken care of by Sedan. He is a young player, dynamic, who wants to progress. He is also an Algerian international.”

Does this deal prefigure some departures (Abidal, Berthod)?
“It doesn’t prefigure anything at all. We simply saw it as best to bring Nadir here rather than seeing him go elsewhere. We made the effort at this time because we have the means at our disposal. But nothing is decided for the future.

An update on the Piquionne story?
“The story hasn’t changed. We wish to wait for FIFA’s decision about Nilmar, because it makes sense that he return to OL. For now, we wait, you have to deal with first things first. If Nilmar returns, he can stay or go elsewhere. We’ll wait and see, and as for Piquionne, we haven’t upped our bid of 5,500,000 plus bonuses. We won’t go further than that for a player of 28 years of age.”

Have you received offers for any players?
“The transfer of John Carew hasn’t been planned, but it is possible.”

“I’ve seen him develop over the last few seasons. With Gueugnon, then Sedan, notably in the final of the Coupe de France, where he was very competitive. I saw him as a wingback, but I know he would like to play further up the pitch. If he can play both positions at the same time, we would only have to have one player on that side of the field…(laughs).”

Why OL?
“I have dreamed of OL. It’s the biggest club in France and one of the biggest in Europe. Who wouldn’t want to come to Lyon? Also, it was important for me to finish the season at Sedan, the club is in a very delicate position right now. I don’t want to jump ship in these circumstances. I was part of the promotion to L1; I want to help the club stay here. It won’t frustrate me at all. I know I have a lot of work to do to improve. And I haven’t played against OL at Gerland yet.”