OL and the Coupe de France 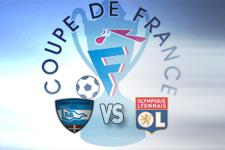 23 times out of 56 participations, OL played its first match away from home.

10 matches in support or to re-play for 7 qualifications and 1 elimination.

No OL player from the 2006-2007 squad has ever won the Coupe de France. Among the staf, only Jöel Bats has had the pleasure of winning it, (3 times in 3 finals) with PSG.
Facebook
Tweet
Forum