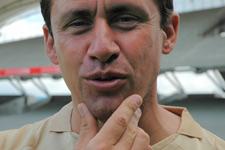 2006 was rich in emotions. The quarter final against AC Milan, the fifth league title and the World Cup. Players, staff and doctors give us their best memories for the year and their hopes for the year ahead. Robert Duverne...
Robert Duverne has many memories of the year 2006. This year, the OL physio only gave himself a short time for holidays. Fresh from being honoured with a 5th title with OL, he headed off to Germany with Raymond Domenech and the French national team. Gerland, Olympia Stadium then Tignes, this champion-maker gives us his trifecta of top memories for 2006, in no particular order:
“The first thing is becoming champions in 2006, one more time… but also our scoring moments in the Champions League. The party…the one for the title, it was unforgettable. We became champions very quickly, so the players were able to celebrate it to the full. That’s what I think were the highlights of this year of football.
This year I feel like I am part of an historic season. We’re only at the halfway point but can still be the best season of any team in French football so far. Now, it’s a bit like the World Cup, you have to win the trophies, because what’s the point of reaching great heights if you come back down empty-handed? In Germany, it was a great time with the French team. I spent 50 days on another planet, Planet Football. A planet with a different kind of light, a golden one that glitters in a corner of our heads and which takes us on an interior journey…in the most beautiful football party you can imagine.
For 2007? To win everything.”
Facebook
Tweet
Forum