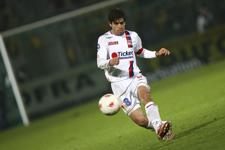 Reactions after the match between OL and Racing Club de Lens.
Jean-Jacques Amprino (OL doctor): Anthony Réveillère is suffering from a corked thigh, we will see tomorrow how he is. Usually this type of injury means 2 or 3 days out. We’ll see about the state of Florent Malouda’s nose as well.
Fred and Karim Benzema have just begun their physical rehab after injury and are in the charge of Robert Duverne. We will see Sylvain Wiltord and Benzema playing again after the break.

Gérard Houllier: These fans are absolutely fantastic. I don’t know many stadiums where, when the home team is four goals to nil down, the fans still go hard to support their team. Hats off to them, they are amazing.
I would also say that my team is amazing. They showed cool heads, mastery of the game and their physical impact, all qualities we will need later on in the season.
I would like to have another attacker up my sleeve but I will have to ask the president.

Eric Carrière: we lost 4-0 against by far the best team in France. Their victory is deserved, there’s nothing to say. There is a big gap between them and us – 17 points – that is unapproachable. We will just have to try to win the championship of coming second.

Grégory Bettiol: Tonight I played my first pro match, and the win is a bonus. OL is an exceptional group of guys, on the team as well as on the staff. They talked to and helped me a lot before the match.

Florent Malouda: I hope the swelling of my nose will go down. Their very athletic defence sometimes used means outside the limits of the law.
In the past, I have been criticised for not scoring enough. I try to make amends. All the points we get now are points we don’t need to get later on. Now we prepare for the return leg of the season, when we aim to be contenders in every competition we contest. br />
Grégory Coupet: Tonight was a Champions League match. It’s tougher to play in modest stadia where there is less atmosphere. When we are expected as we were tonight, the excitement pushes everything that much further.
They tried to make it a physical encounter, and we responded. Once again, Juninho was decisive. In this game, everyone has their talents, and for clinical strikes from distance, we have Juninho. We don’t take advantage of this, we are all good players, but we know that if the opposition make an error near the area, they will pay cash.
The championship isn’t over. If we think like that, we will blow the second half of the season.

Jean-Michel Aulas: It was a great match, a great victory and a great result. You have to congratulate this team that just doesn’t miss a beat. Even though we had some players missing through injury, and Anthony Réveillère left the park injured. The credit must go to Gérard (Houllier), his staff and, of course, this formidable team.
There is a permanent motivation in the team, even when, like at the moment, OL leads the league, to distance itself as far as possible from any team that could gain form.
It’s not over yet. Last season, we had a lead of 12 points at this stage, only to have a bad patch in December. This season, we have had a good December, but we must remember Bordeaux could have come within three points had they beaten us. We must continue this way, this year is an exceptional one. We have exceptional players, we are well-organised tactically and we have an extraordinary mentality. That’s what has made the difference.
I have always listened to the managers. When you hire a manager of this quality, it’s to hear what he has to say. I have already made my position clear. If Gérard Houllier needs another attacker, even if the results are good, we will find another attacker. We just have to wait to see what FIFA decides tomorrow or the next day. On principle, Nilmar should come back to Lyon quickly. If he does, that will offer another attacking option. After that, Gérard (Houllier) will choose the player who suits him. If he wants to keep Nilmar, he will, and if he wants us to look to other clubs for players, we will try to satisfy his wishes.