Clerc: "We must be very watchful" 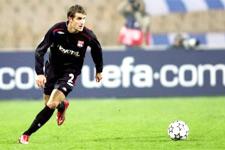 After Lyon’s victory over Marseille, François Clerc once again insisted upon the virtues of humility and caution in order to continue in the same vein, especially for Wednesday’s “very difficult” match against Paris Saint-Germain…
François, we imagine you’re pretty happy after the win against Marseille...
We played a really great game against Marseille and they were really hoping to knock us off. A lot of people were hoping we’d be beaten but we responded in style. Of course we’re happy, but we have to remain humble. It was a very important match and we really proved a point, but we can’t just stop there. There’s still a long way to go.

Do you think, like many, that the league title is already in the bag?
No. For the moment we’ve made an exceptional start, taking 28 from a possible 30 points, but to keep up this rhythm for the rest of the season will be very hard indeed. There are still a lot of matches to go and every team we play is hyper-motivated to beat us. Of course we are going to struggle in certain matches. But we have to stick together in order to manage and control games as much as we can.

After your win over Marseille, many observers think you’ll easily defeat PSG. Do you agree?
Of course not. We’d be very happy with a 1-0 win. In some matches we have the chance to score a lot of goals. At the moment they’re going in, but each match is different. It could well be a very tough, very tight match. It’s a Cup match in which they’ll be looking to eliminate us. I don’t think we’ll be scoring five goals against Paris…

After a win like last weekend, how do you refocus on a Coupe de la Ligue game against PSG?
That’s one of our strengths. We have a big squad and everyone plays and is involved. As soon as a player gets on the field, he gives his all because he wants to show his worth. That’s what makes this team so strong. Always questioning yourself and improving is essential because the tough matches just keep coming, like Wednesday’s against PSG.

Is playing against PSG a source of extra motivation?
They are always big games. And they have a very good squad. Their start to the season was a little ‘delicate’ but they’re starting to rediscover some form. We know they’ll be up for this match. They like being the outsiders and we’ll have to be very watchful.

Are injuries a problem?
That’s the law of the season. Last season we had a lot of injury trouble, which also gave me the chance to earn a place in the team. I don’t think injuries can upset us. We’ve got a big squad and each time we change the side around, the results keep coming.
Videos
Facebook
Tweet
Forum
Videos