Coupet: "I’ll be right for the derby" 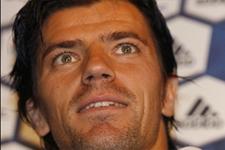 Grégory Coupet is optimistic that his finger injury will be alright for Saturday’s match against Saint-Etienne, and he also reveals his joy that training partner and number two goalkeeper Rémy Vercoutre has signed a new deal with the club…
Can you give us an update on your status?
Could be better. I would love to be playing on Wednesday with France against the Faroes Islands, but I’ve got this little problem with my finger. It was just too painful to be able to take my place in the team. I prefer not to take any risks and I have to look after myself so that I can play on Saturday.

How did you injure yourself?
Coming out for a high ball. I don’t know who hit the finger but the next day my finger had swollen to twice its normal size. Now I have to wait until the circulation gets better, until the swelling goes down and it gets less sensitive.

Will you be able to play on Saturday?
It will be okay for the derby. We did the x-rays this morning. I was really afraid there was going to be a problem with the bones. But there was nothing, so I just have to wait until the swelling subsides. It can’t be too bad because I can still do a big athletic work out.

How do you see Saturday’s match?
It’s a derby, so it’s more than important.It’s important for us but also for our fans. There’s always a lot at stake in these games, huge atmospheres and a real desire to impress. It’s exciting.

It’s even more than a derby because they’re fourth in the league...
No. It’s still a derby before everything else. Even if one of the two teams was in last place, there’s no ladder for the derby. It’s simply a match you have to win because all the local rivalry is riding on it.

Last season, they were a little upset with how you had celebrated your goals. Was that a little lacking in respect?
No. If they took it that way then we apologise., that wasn’t our intention t all. We were just coming towards the end of a huge season in which we had never given in to the euphoria. Once we’d won the title we were just so happy that we couldn’t control it. We’d done our work and from that moment on it was all about the pleasure. It had nothing to do with them. In the derby, above all, you want to be focused and efficient.

Is this match more important than the trip to Kiev ?
They’re not the same thing. When you’re aiming for the league crown, the three points are the main thing. They’re fourth so it’s going to be a super match because both sides clearly have the quality. They have a good team, very good offensively. There’s a lot of respect but also a lot of desire.

Are you worried about the duo Piquionne-Ilan?
… Feindouno, Dernis, Janot are all in good form. They really have a good team. It’s going to be a very tight match.

Rémy Vercoutre has just signed a new deal. Are you pleased?
Of course. I’m delighted. Above all, because he’s a very good goalkeeper for Olympique Lyonnais but also personally because he’s a player that gives 100% at training. He has the same virtues as me, we’re cut from the same mould. We really get along really well.

Do you think Jérémie Janot can be far from a place in the France team?
He’s there abouts. His performance speak in his favour. There really is an incredible generation of ‘keepers coming through the ranks.
Facebook
Tweet
Forum