Results of the Lyon internationals 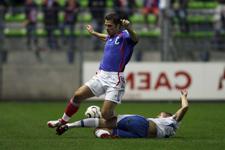 After their loss to Northern Ireland (3-2), Spain suffered a second straight defeat at the hands of Sweden. Kim Källström came on for the final 15 minutes of the match won 2-0 by Lars Lagerbäck’s side. Sweden leads Group F with a maximum nine points from three games. They are five points clear of Denmark and Northern Ireland.

In Lisbon, Portugal had a comfortable 3-0 win over Azerbaijan thanks to a double from Manchester United’s Cristiano Ronaldo. Tiago was introduced in the 64th minute at the expense of Maniche. Portugal are third in Group A, three points behind Serbia, but with a game in hand.

In Caen, for a Euro 2008 qualifier, the France Under-21 side, Les Espoirs, were held to a 1-1 draw by Israel. Despite being reduced to ten men in the 36th minute (red card Peser), i twas Israel that opened the scoring in the second half before Zubar equalised with a stunning 25m strike. Jérémy Berthod and Karim Benzema both started the match. The striker played the first 53 minutes just behind Jimmy Briand before making way for Blaise Matuidi. Jérémy Berthod had a good match and was replaced in the 67th minute by Nancy’s Dia.

Against Kuwait, Brazil ran out comfortable 4-0 winners thanks to goals from Rafael Sobis, Robinho, Daniel Carvalho and Kaka. Introduced in the 58th minute, Fred played the final half-hour of the game.
Facebook
Tweet
Forum